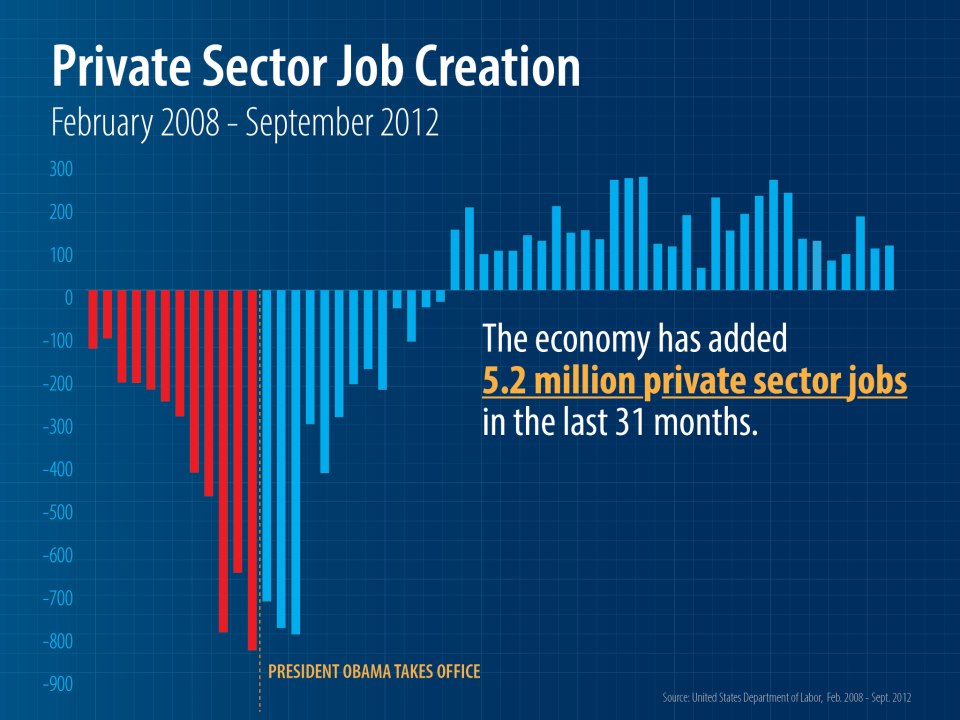 *"This makes me think that the improvement in the consumer confidence surveys in recent was picking up something real."

*"With revisions, summer lull in job growth wasn't much of a lull at all."

Also note that four years ago at this time, the economy was hemmorhaging jobs, with 159,000 jobs LOST in September 2008, the 9th straight month of job LOSSES that year. Are we better than we were four years ago? YES, and by a long, long ways! Thank you, President Obama! (The Washington Post notes that "There are now 325,000 more than when Obama took office." If you think about that for a few minutes, consider the absolute free fall/disaster Obama walked into, that's nothing short of incredible, astounding, impressive, whatever word you want to use. Wow.)

P.S. There goes the Romney campaign's moronic line that "unemployment's been above 8% for xx months." That was always absurd, as it ignored a million things (e.g., when the recession began and WHY it began, the fact that unemployment's been coming down steadily the past 3+ years, the fact that this progress has occurred in SPITE of Republican obstructionism and their monomaniacal focus on causing President Obama – and along with it the US economy – to "fail"). Can we say "FOUR MORE YEARS?" 🙂

UPDATE #2: Oh, and for all the crazy Republican conspiracy theorists out there, claiming that these numbers were made up to help Obama before the election, consider this: TrimTabs (private firm) estimated even BETTER numbers (+210k jobs in 9/12), as did private firm ADP (+162k jobs in 9/12). Big conspiracy, I guess! LOL

Statement on the Employment Situation in September

WASHINGTON, DC – Alan B. Krueger, Chairman of the Council of Economic Advisers, issued the following statement today on the employment situation in September. You can view the statement HERE.

The Employment Situation in September

While there is more work that remains to be done, today’s employment report provides further evidence that the U.S. economy is continuing to heal from the wounds inflicted by the worst downturn since the Great Depression. It is critical that we continue the policies that are building an economy that works for the middle class as we dig our way out of the deep hole that was caused by the severe recession that began in December 2007.

Most pressing, Congress should pass an extension of middle class tax cuts that President Obama proposed, and the Senate passed.  This extension would prevent the typical middle class family from facing a $2,200 tax increase at the beginning of next year. In addition, the President has proposed a plan that will enable responsible homeowners to refinance their mortgage and take advantage of today’s historically low interest rates. To create more jobs in particularly hard-hit sectors, President Obama continues to urge Congress to pass elements of the American Jobs Act, including further investment in infrastructure to rebuild our Nation’s ports, roads and highways, and assistance to State and local governments to prevent layoffs and to enable them to rehire hundreds of thousands of teachers and first responders.

The household survey showed that the unemployment rate fell from 8.1 percent in August to 7.8 percent in September, the lowest rate since January 2009.  Labor force participation rose by 418,000 people in September, and the labor force participation rate rose by 0.1 percentage point. Over the last 12 months, the unemployment rate has decreased by 1.2 percentage points, the largest drop since February 1995.

As the Administration stresses every month, the monthly employment and unemployment figures can be volatile, and employment estimates can be subject to substantial revision. Therefore, it is important not to read too much into any one monthly report and it is informative to consider each report in the context of other data that are becoming available.

Alan B. Krueger is Chairman of the Council of Economic Advisers.