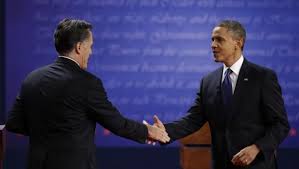 Prior to the first debate, many Democrats were metaphorically high-fiving each other, doing a pre-victory dance in the end-zone. After the debate, the revived Republicans powered up their CEO smirk- machine, crowing that their man’s aggressive performance buried an obviously weak President, revealing him as an amateur in over his head.

The next day came one analysis after another from upset liberals, disappointed supporters, and know-it-all pundits, some piling on with criticism of President Obama’s “passive” or “listless” performance, some rationalizing that “the President just had a bad day,” some pointing out that Obama  plays a masterful “long game,” and was giving Romney rope enough to hang himself (witness the new attack ads based on Romney’s lie-a-minute self-contradictory statements), and all of them taking note of Romney’s rudeness, his bullying behavior, and his refusal to play by the rules. All have agreed that Obama does not debate well, and never has; all have agreed that Romney was hyper-aggressive, domineering, and, some hinted, may have illegally used hidden notes which he smuggled on to his podium (an as-yet-unconfirmed accusation).

Upon reflection, I believe the debate offers two very interesting subliminal narratives, one for each side. They are not mutually exclusive; one, both, or neither may have been deliberately employed, and each delivers a powerful psychological punch, if, as I believe, politics is power, and is a form of warfare.

Shortly before the Wednesday debate, New Jersey Governor Chris Christie was quoted in The National Journal as saying on “Meet the Press” that “Come Thursday morning, the entire narrative of this race will change.” Was he telegraphing that the Republican tacticians intended for Romney to deliver another one of those compelling “narratives” out of the Karl Rove playbook, one that exemplified the traditional conservative powerful-father-as-leader, the alpha male patriarchal story of macho dominance? That is what I see as the subliminal message underlying Romney’s increasingly frenetic performance, as he went from initially tentative interruptions, to making sure he always had the last word, to being more and more rude to the feckless moderator, to louder and longer speeches with forceful gestures. He became more confident, brusque, and domineering as he got away with each successive escalation. His final smirks said it all: “I am Top Dog, I owned this stage.”

He knew he had delivered a good performance of the preferred Republican leadership template, one his party believes is rooted not only in the Bible but in human nature: the forceful male leader who imposes his will on all lesser beings, including wive(s), children, weaker males, debate moderators, states, and whole countries, and which are today exemplified by global CEOs, tough winning quarterbacks, and those magnificent masters of the universe on Wall Street.  The Republican pantheon of these near-deities includes, or has included,  George W. Bush (remember his “Mission Accomplished” jumpsuit on the aircraft carrier?), Mayor Rudy Giuliani of New York, Governor Scott Walker of Wisconsin, even certain general officers….

Winning is everything in this scenario, by any means possible.  Lying and cheating, brutality or torture are simply useful tools in the toolbox. Of course, it is assumed that everyone wants that kind of determined, ruthless leader who will protect his underlings/corporation/country in this cruel, unsafe, and hostile world. They claim it’s traditional values—-  and, the truth is, those with an authoritarian mindset, as well as a surprising number of less rigid types, do resonate to this stereotype. Why not? It’s a staple of Western movies, not to mention a vast number of ancient myths.

Romney’s take-charge attitude, according to this scenario, framed him as the alpha male, the exact type “you people” are comfortable with as your leader because, in the Republican patriarchal narrative, most people (especially female-type people) are not real adults, they hunger to be led and told what to think. President Obama thus was shown to be inferior, weak, not a leader, a submissive male who was afraid to rumble, rolled on his back and put his paws in the air, so to speak. End of story.  That is the message the Republican tacticians and spinmeisters expected the millions of viewers of the debate to take away. They never had to make the message explicit, just use street theatre to deliver it. Messages like that sink deep, are inexpressible but compelling, and are also hard to dissipate, once embedded in the subconscious.

Most Democrats, and many independent women, apparently saw Romney as a rude bully, not as a fearless leader, someone untrustworthy who would be dangerous if he had his finger on the red button in the White House; most Republicans, and many independent men, saw Romney as an aggressive leader who would not be fussy about crushing America’s enemies, someone who could get things done.

Despite the fact that most of the President’s Democratic constituents believe that he is “no drama Obama,” unflappable, thoughtful, intelligent, a man who weighs all options before making a decision, and who thinks more than one move ahead (unlike, say, Bush, or Romney for that matter, who tends to shoot from the hip, is locked on the bottom line for each quarter, to whom “long-term” means three quarters, not three years, much less three generations), they still have difficulty coping with these characteristics in action; it is not a basic American value, somehow. They do not quite “get” how playing a long game operates, but that is exactly what Nur Alia ChangFollow proposes in her diary “The Debate…and The Art of War” on DailyKos. Change quotes Sun Tzu: (in part)

…All warfare is based on deception. Hence, when able to attack, we must seem unable; when using our forces, we must seem inactive… Hold out baits to entice the enemy. Feign disorder, and crush him… If your opponent is of choleric temper, seek to irritate him. Pretend to be weak, that he may grow arrogant. If he is taking his ease, give him no rest… Attack him where he is unprepared, appear where you are not expected. These military devices, leading to victory, must not be divulged beforehand…

Thus, says ChangFollow, in the debate, Romney was baited, i.e., allowed to talk as much as he wanted, so that the Obama campaign would have ample material for devastating future ads— “what better weapon do you have against an opponent, than the one your opponent hands you?”— let Romney believe he was “in a board room, amongst people like him[self]” just as when Mitt uttered the immortal “47 percent.”

Obama let Romney run free, according to ChangFollow, putting his impatient character and arrogance on full display: The Bully Rampant. Obama knows Romney has to satisfy divergent factions in his own party: the obsessively anti-Obama haters, the ideological and theocratic right, and the more rational conservatives and independents who “think of a candidate as someone who will benefit them” but also demand fiscal responsibility; to these elements, I would add virulent Tea Partiers and the greedy global corporate moneybags like Koch Brothers who simply want a subservient puppet in the White House.  In juggling these factions, Romney must take both sides of any issue, depending on his audience, if he is, like a typical CEO, going to “seal the deal.” Such deceptive practices do not work well “while standing next to his opponent”— and all the self-contradictions are all on tape at one time in public.

Meanwhile, Obama was giving a good impression of being the disciplined, patient adult in the room. As one commenter saw it, “Mitt Romney is playing a tactical game, trying to ‘win’ every situation without thinking of long term strategy.” The Etch-a-Sketch candidate managed to contradict loudly every previous statement he has made.  Even conservative pundits remarked on Romney’s “lie-a-minute” monologues, and his egregious invention of studies and statistics that were completely untethered from any reality. All this hyper activity at the Romney podium made Obama look, well, unflappable… and very presidential.

No one mentioned the infamous 47 percent, perhaps because Obama figured the Romney campaign was prepared for it, and would use the topic to launch as full-throated make-over intended to de-fang the embarrassment before millions of watchers—- which Romney actually did the following day at a small rally. The subliminal message here was the contrast in character: Romney appearing as an arrogant, rather excitable and impatient person who would be neither reliable nor trustworthy as the commander-in-chief of the only remaining world power; and Obama as the cool, collected adult (“still waters run deep”), reliable and not likely to make snap decisions or commit the country to an ego-tripping adventure.

This subliminal message, in my opinion, would have been better served had Obama unexpectedly taken advantages of at least a couple of the openings Romney offered him mid-rant (such as when Romney , pretending he did not know about tax breaks for shipping jobs overseas, said he “needed to get a new accountant,” or the numerous mathematical and statistical impossibilities in Romney’s budget and tax promises) . This would have satisfied his own base, and given an unsophisticated audience a better clue as to what was going on, and made him look less like a wimp.

Also, Obama had an unforced error when he told Romney they were probably not too far apart on Social Security, after promising voters earlier he would preserve Social Security as-is (this was, I believe, worse than Romney’s unforced error promising to kill off Big Bird). In other words, even if Obama’s plan was to make Romney’s character defects abundantly clear, while laying up a rich treasure trove of Romney lies and duplicity for use on the campaign trail, one of Obama’s character defects was also revealed: he does not like, and does not deal well, with personal confrontation face-to-face. An old community organizer’s instincts are to avoid conflict and try to find common ground—- which may explain the unforced error on Social Security. This, I believe, marred the  effectiveness of his subliminal message a bit.

We will not know if either of these subliminal message scenarios were actually deliberate (unless some campaign guru writes a tell-all book after the election). One piece of evidence might be movement in the polls after the dust settles from this first debate, when we see what segment of voters, if any, moves to one or the other candidate, and admits to some reason such as “I think Romney is a strong leader,” or “Obama is reliable and cool under pressure,” or some such rationale. We will also be able to tell how deliberate all this was  by seeing how the candidates react in their second debate, when, after taking each other’s measure in the first meeting, they begin to move in for the kill.