Does Sen. Mark Warner read Ezra Klein, who recently noted that “Social Security taxes don’t apply to income over $110,000?” Maybe, maybe not. But Warner does seem to be coming around to Klein’s position on the issue, based on an answer Warner just provided to my question on his #askwarner Twitter townhall.

My question: “Before even considering cuts to Soc. Security or Medicare, will you support raising the $110,000 income cap subject to taxation?”

Warner’s answer: “@lowkell I think raising the cap has to be part of any SS reform.”

I checked around, including OnTheIssues, and it appears that Tim Kaine supports lifting the payroll tax cap, but that Mark Warner had, at least until now, had “No stance on record” on this issue. In contrast, Warner has said he supports raising the retirement age for Social Security, which is what Ezra Klein talks about in his column, noting the Congressional Budget Office finding that making “all income subject to payroll taxes…would do three times as much to solve Social Security’s shortfall as raising the retirement age to 70.” Let’s hope Sen. Warner reaches the same conclusion as Ezra Klein, and the CBO, have. 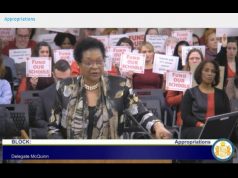 It’s Halftime At the Virginia General Assembly, and Do We Ever Have a Show!