Many people, including UVA Professor Larry Sabato, have noted the “three decades-long Virginia trend to elect a governor opposite to the party of the president.” Thus, as Sabato explains, “for eight consecutive elections [since 1977], Virginia has elected a Republican governor every time a Democrat was in the White House or a Democratic governor every time a Republican occupied the Oval Office.” Why has this been the case? In Sabato’s view, it’s “a natural early-midterm reaction, a kind of snapback, which reflects the natural American tendency to want to check and balance power.” To his credit, Sabato emphasizes that “this voting pattern is a tendency, not an iron rule of politics,” and that “[the] string…will be broken at some point.”

I agree with Professor Sabato that the 8-elections-in-a-row string is “not iron rule of politics,” and that it’s bound to “be broken at some point.” But I wanted to take it a step further than that, so I went back and looked at those gubernatorial elections since 1977. What I found should pretty much debunk the myth of Virginia always voting opposite of the party in the White House.

For starters, check out this graphic of the president’s net approval rating right before Virginia’s gubernatorial election in each year since 1977. Notice something? Like, for instance, that Virginia voted opposite the party in the White House even when presidents had high net approval ratings? That, of course, would make zero sense – logically, psychologically, or any other way. Follow me past the “fold” for more. 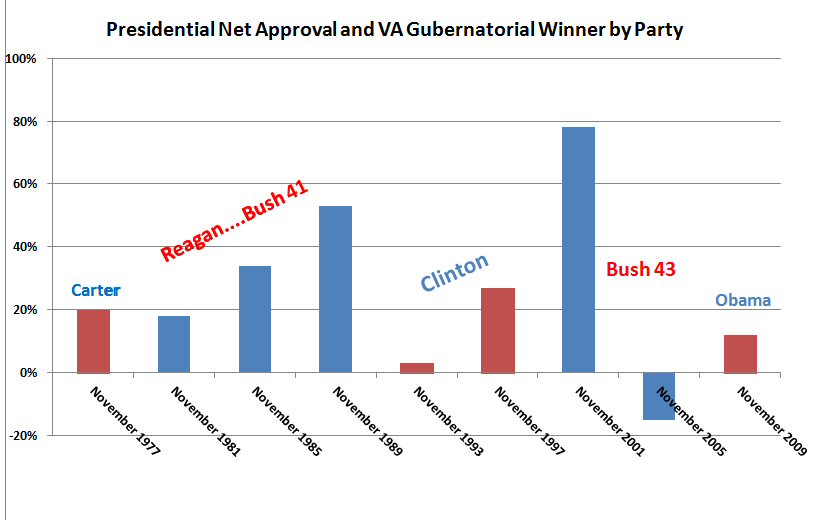 For instance, in November 2001, President George W. Bush had a net approval rating, post-9/11 attacks, of a whopping 78 (!!!) points. If anything, Bush’s enormous popularity should have boosted Republican gubernatorial candidate Mark Earley to an easy victory of Democrat Mark Warner. Instead, Warner won by about 100,000 votes. This result completely refutes the logic implied by the “always votes opposite” relationship, which is that Virginians are unhappy with the party in the White House, so they vote to send a message by going for the opposing party. In 2001, Virginians were most certainly NOT unhappy with the Republican Party, yet they voted Democratic for governor. Huh?

OK, so maybe 2001 was an extraordinary case, given the traumatic events of 9/11. How about in November 1997, when President Bill Clinton had a net approval rating of 27 points, but Virginians nonetheless elected Republican Jim Gilmore governor? Or November 1989, when President George HW Bush had a whopping net approval rating of +53 points, yet Virginians made history by electing Democrat (and African American) Doug Wilder governor? Or how about the two Virginia gubernatorial elections held during Ronald Reagan’s presidency, with the Gipper in positive net approval territory (+18 and +34) in both elections, yet Virginians voting Democratic in both 1981 (Chuck Robb) and 1985 (Gerald Baliles)? Again, none of this makes any sense whatsoever.

Before I move on from this graph, let me make two more points. First, there was one gubernatorial election – the Kaine vs. Kilgore race of 2005 – where one actually could, plausibly, argue that the president’s unpopularity helped the gubernatorial candidate of the opposite party. Recall that Republican Jerry Kilgore was leading Democrat Tim Kaine most of the summer of 2005, but that after the Bush Administration’s debacle/meltdown mishandling Hurricane Katrina, Bush’s approval rating tanked and Kaine pulled ahead of Kilgore en route to victory in November. Now if we’d seen that type of thing since 1977, I’d put some stock in this “8 elections in a row” thing. But it didn’t, and I don’t.

Second, it’s important to note that during this 32-year period, there were only three elections in which there was a reelected, second-term president (like we’ll have next November) in the White House. That means the “sample size,” statistically speaking, for this supposed relationship has an “n” (sample size) of only three (3). You don’t have to be a statistician to know that a sample size of three is not going to have much statistical validity, let alone predictive power, for future elections (not that an “n” of 8 was much to write home about either).

I think we’ve already demolished this 8-elections-in-a-row “rule,” but what the heck, let’s pile on for the fun of it. The next piece of evidence I’d point to is that Virginia’s electorate today is wildly different than it was back in 1977, so even if there WAS some sort of oppositional voting pattern going on back then, it’s hard to believe it’s still valid today. Let’s start with the number of Virginia registered voters, which has well more than doubled, from 2.0 million in 1977 to 5.4 million in 2012. Let’s also consider that the vast majority of these new voters poured into the urban/suburban “crescent” (NOVA to Richmond to Hampton Roads), particularly places like Fairfax County, Loudoun County (cow pasture back in 1977), and Prince William County. As a result of these trends, as well as many other socioeconomic changes in the state and the country over the past  three decades, Virginia in 2013 will be a wildly different state than it was in 1977. To assume that any relationship which might (emphasis on “might”) have held sway back then would still do so today is…well, let’s just say it’s a major leap.

Finally, I suppose one could argue that Virginia voter turnout was driven, at least in part, by feelings about the party holding the White House. However, the data – as depicted in the chart below – simply doesn’t indicate that at all. For starters, note that there appears to be no particular relationship between voter turnout percentages and who was in the White House, what their net approval rating was, or just about anything else. What we DO see is a declining voter turnout rate since 1989, and THAT, in my view, is highly significant, although it has nothing to do with who’s in the White House. We’ll get to that shortly. 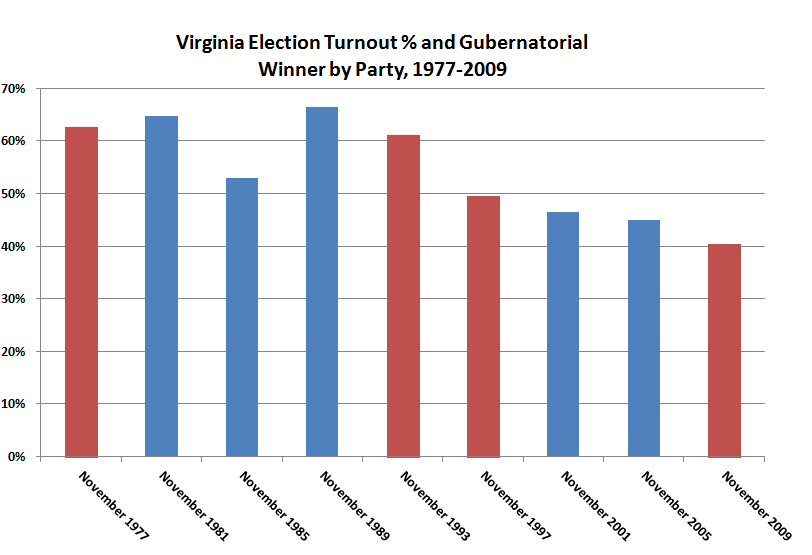 In addition, note that there’s no apparent relationship – certainly not a strong one – between voter turnout and whether a Democrat or a Republican won the governor’s race. That’s counterintuitive, as one would thing that Democrats benefit from higher turnout. Yet what we see is Democrat Mark Warner winning with just 46% turnout, and Democrat Tim Kaine winning with just 45% turnout, while Democrat Mary Sue Terry LOST to Republican George Allen with 61% turnout, and Democrat Don Beyer LOST to Republican Jim Gilmore with 50% turnout. If you can find some rhyme or reason to these statistics, more power to you – but I sure can’t.

I’d say at this point we’d demolished the “8 elections in a row Virginia’s voted opposite the party in the White House” myth. Rest in peace, good riddance, etc. Of course, this doesn’t mean that Democrat Terry McAuliffe is as shoo-in in 2013. But it also doesn’t mean that McAuliffe is destined to lose because of some three-decades-long pseudo relationship. Of course, the same people who believe “relationships” like this one also probably believed the “no president’s ever been reelected with unemployment over 8%, or 7%, or whatever.” Until 2012, that is. Or that America had never elected an African American as president. Until 2008, that is. The point? Relationships are meant to be broken, especially when they’re not based on anything to begin with, but also when conditions have changed to the point that whatever merit they once had no longer exists. We also, of course, need to look at specific candidates, specific campaigns, specific moments in time, specific economic conditions, a whole host of factors, to figure out why someone won or lost an election. That’s a lot harder than just saying there’s a simple-minded/brain-dead “rule,” but it’s also a lot more rewarding.

Now, one final point. I noted earlier that Virginia voter turnout for gubernatorial elections declined sharply from 1989 (66.5%) to 2009 (40.4%). That’s why, despite the number of registered voters skyrocketing (from 2.7 million in 1989 to 5.0 million in 2009), the winning gubernatorial candidate consistently got somewhere in the 900,000-1 million vote range. The one relatively minor exception: Bob McDonnell’s wipeout of Creigh Deeds in 2009, when McDonnell got 1.2 million votes, which of course is not much higher than the usual 1 million. (Note: Deeds did an absolutely horrendous job of connecting to “federal voters” in places like northern Virginia, which was a major reason for the abysmal turnout by Democrats in 2009)

Why is Virginia voter turnout for gubernatorial elections not increasing proportionately along with voter registration? There’s a simple, and extremely important, reason for this: most of the growth has been among people whose focus if far more on national issues and the federal races than on anything going on in Richmond. A lot of these new Virginians moved here recently, work in Washington, DC (or Maryland, or wherever), are federal employees or contractors, are young and haven’t necessarily set down roots in Virginia (at least not yet), etc, etc. Thus, these folks vote in huge numbers in presidential elections, but are almost completely tuned out of Virginia state (and local) politics.

The net result is that Virginia’s fast becoming “blue” in presidential years, but is stubbornly staying “purple” in off-year elections. That doesn’t mean Democrats can’t win gubernatorial elections; in fact, the “blue team” has won 5 of the last 8. But it DOES mean that Democrats need to work hard at convincing “federal voters” that Virginia governor’s elections matter to them, to their families and friends, etc. If we don’t convince them that who occupies the Virginia governor’s mansion matters TO THEM, then they won’t vote. Period. And we’ll be in a much tougher race against even a right-wing extremist like Ken Kookinelli than we should be, by all rights.

P.S. Almost needless to say, the inability of the Virginia Democratic Party to turn connect with this huge influx of new, federally-oriented voters and convince them it’s important to vote in NON-federal years has been a major failure. Going forward, that needs to change, drastically, if we’re going to turn this state “blue” once and for all.

Here's what the Code of Virginia says about filling a vacancy for US House. No timeframe specified, apparently. https://bluevirginia.us/2022/11/rest-in-peace-rep-donald-mceachin-d-va04-a-gentle-giant-a-compassionate-champion-for-underdogs-a-climate-warrior-a-christian-example-an-understanding-dad-a-proud-husband-a-loyal-brother#comment-6052797912

Thoughts from VA Senate President Pro Tempore @SenLouiseLucas on the death of Rep. Donald McEachin, who Lucas knew and served with for over 20 years... https://bluevirginia.us/2022/11/rest-in-peace-rep-donald-mceachin-d-va04-a-gentle-giant-a-compassionate-champion-for-underdogs-a-climate-warrior-a-christian-example-an-understanding-dad-a-proud-husband-a-loyal-brother#comment-6052786569