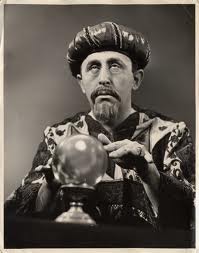 Given that the vast majority of forecasts made about future events are invariably wrong, the obvious question arises: why try to predict the future at all? A few reasons. First, it’s a natural human tendency (they used to read cat entrails and other crazy stuff liike that; now they plug numbers into computers and think that garbage in won’t lead to garbage out – good luck with that!) to want to know what’s going to happen, and by knowing, perhaps to gain a measure of control over the uncertain, therefor anxiety-producing, future. Second, it helps think through the possibilities and try to understand the forces at work. Third, it’s kinda fun.

With all that in mind, a year ago I actually put out a list of “13 Fearless (Foolhardy?) Predictions for 2012”. How did I do? Let’s review (the correct ones are in green, the partly right/partly wrong ones in orange, and the totally wrong ones in red).

1. “The U.S. economy continues to recover, in part as Europe avoids meltdown. The unemployment rate drops below 8% by election day 2012.”

BINGO, all that undergraduate and graduate level economics I studied wasn’t a complete waste of time (and my parents’ money – heh) after all! 🙂 That’s right, in 2011 the economy kept on its slow recovery, with the national unemployment rate falling from 8.5% in December 2011 (when I made this prediction) to 7.7% in November 2012.

2. “Willard ‘Mitt’ Romney easily wins the Republican nomination for president, as the anti-‘Mitts fail to coalesce around one legitimate candidate (and no, Ron Paul isn’t a legitimate Republican candidate).”

BINGO once again – that is exactly what happened. If the anti-Mitts had coalesced around one candidate, which they belatedly tried (but failed) to do, I think it’s possible one of them would have stopped the Mittster. But they didn’t, and we know the rest of the story.

3. “Either Ron Paul (although he’s damaged goods due to all the past racist, anti-Semitic, etc. writings) or egomaniac loony-tunes Donald Trump — or another right-wing Tea Party type — runs as a third-party candidate, in addition to Libertarian Gary Johnson, winning votes from conservatives and others on the right unhappy with flippin’-but-formerly-to-the-left-of-Ted-Kennedy, Willard “Mitt” Romney.”

4. “In large part because of #1-#3, Barack Obama is reelected president of the United States by a comfortable margin (3-5 percentage points), although not as big a landslide as in 2008.”

5. “Obama wins Virginia again, albeit by a more narrow margin than last time around, thanks to a huge margin in Northern Virginia, heavy turnout by African Americans and Latinos, and OFA’s organizing ability – but NO thanks to DPVA.”

Again, that’s exactly what happened: Obama won Virginia, but by only 4 points this time around, down from 6 points in 2008. Obama’s victory was driven by heavy turnout among African Americans and Latinos, a huge margin in NOVA, and OFA’s organizing ability. Correct on all counts.

WRONG. Of course, I didn’t foresee McDonnell completely melting down over “transvaginal ultrasounds.” I also didn’t foresee Romney making a stupid pick like Paul Ryan, not that I think McDonnell would have helped Romney carry Virginia regardless.

8. “Democrats and Republicans end up tied for control of the U.S. Senate. Vice President Biden breaks the ties, but the Senate remains largely paralyzed as it has been for several years now (thanks to Republican abuse of the filibuster, mainly).”

I mostly this one, as Democrats did FAR better in the Senate than I thought they’d do, even winning seats in red states like North Dakota and Missouri that I thought for sure were goners. Still, the other part of the prediction is correct, as the Senate remains largely paralyzed thanks to Republican abuse of the filibuster, even as Democrats remain nominally in control.

9. “Democrats come very close, but fall just short of taking back the U.S. House of Representatives. Watch your back, John Boehner, as Eric Can’tor mounts a coup attempt for Speaker!”

Partly correct, as Democrats DID gain seats in the House, but they remain further from taking it back then I thought they would. On the other hand, Boehner does remain in serious danger of a coup attempt for Speaker, although I’m not sure that Eric Can’tor will be the one mounting it…

10. The Supreme Court does NOT rule the individual mandate as unconstitutional, although with some sort of wishy washy language that falls far short of a definitive ruling and leaves it as a live political issue. Whatever the exact decision, the Supreme Court case reminds people, in the middle of a presidential election year, that the mandate was originally a conservative, Republican idea (supported by Mitt Romney, Newt Gingrich, etc.), an alternative to “Hillarycare”‘s employer mandate. Ken Kookinelli throws a temper tantrum, ranting and raving about King George, “First Principles,” blah blah blah.”

Basically nailed it, as the Supreme Court didn’t rule the individual mandate as unconstitutional, but only with some creative constitutional analysis by Chief Justice Roberts. And yes, Kookinelli threw a temper tantrum, before getting a grip on himself and somehow declaring victory of sorts. Who the heck knows with that guy, though, he’s completely bonkers after all.

11. In part due to the DPVA’s utter dysfunction, there will be no serious Democratic candidates opposing Morgan Griffith, Robert Hurt, or Eric Can’tor.”

Mostly wrong, although I guess it comes down to how one defines “serious.” In the end, all three of those Teapublican’t Congresscritters were opposed, but they all won easily, as their Democratic opponents were mostly unknown and underfunded. Was that the fault of DPVA? In the long run, one could argue that DPVA needs to be building a strong Democratic operation in Virginia, and that doesn’t seem to be happening. On the other hand, the opponents for Griffith, Hurt, and Can’tor all ran energetic campaigns in solidly red districts, so I’m not sure how much DPVA could have done there.

12. “Newt Gingrich is NOT on the Republican ballot in the Virginia primary, but he nonetheless manages to (mis)use a few more absurd historical analogies (in addition to “Pearl Harbor”) to express how this is the WORST thing in the history of the world!!! LOL”

Yeah, pretty much – Newt is nuts.

13. “Budget and tax battles continue all year, at the end of which, a reelected President Obama’s leverage – due to the imminent expiration of the Bush tax cuts, as well as budget cuts slated to kick in automatically – leads to a grand bargain of sorts (this may be the final straw for Boehner, or Can’tor’s “Nixon goes to China” move, which Boehner lacked the credibility with Tea Party to pull off).”

Well, this one’s interesting, as it’s still up in the air, even as the sand in 2012’s hourglass runs out. But yes, budget and tax battles continued until the end of 2012, with the possibility of a “grand bargain” certainly out there, and with Boehner hanging on for dear life, possibly losing his Speaker’s job over this entire cluster@#$@ situation.