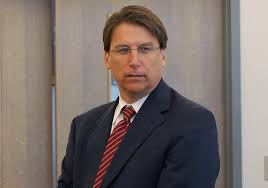 North Carolina Governor- Elect, Pat McCrory ran as a pretend moderate.  But he was a stealth Tea Party candidate. During the campaign, there was:

* Little mention of his 29 years at Duke Energy;

* Zero mention of his leading an Americans for Prosperity Bus Tour in 2010;

But, had they paid attention, voters should have known. McCrory said he would cut the state budget in half over ten years! That is a devastating plan for North Carolina’s citizens, made worse by the fact that today the budget is less as a percentage of the state’s GDP than in 2004. And he promised to take advantage of the resources “under our feet and off our shore.” In other words, drill, baby drill; and frack, baby frack.  Otherwise, he had nothing to propose. And he said little of substance. Instead he looked into the TV camera with feigned sincerity, squinted, and pretended he’d work across the aisle to solve North Carolina’s problems. Not quite.

Now Pat McCrory cannot even pretend moderation.  He appointed failed politician and big donor to NC Republican politicians, Art Pope, to be North Carolina’s Deputy Director of the Budget. Constitutionally, the Governor is the Budget Director. This is almost like appointing Grover Norquist or the Koch brothers. Art Pope himself wanted to achieve higher office, but though he served in the House of Delegates, his one attempt at one of the top two elected officials failed. Instead, the NC version of the Koch Brothers has funded the Tea Party, served as a director of Peter Peterson’s Americans for Prosperity (for the 1%) Foundation, and is the wizard behind the so-called John Locke Foundation and Civitas. Is it any wonder McCrory was involved in an AFP bus tour?  He’s Tea Party through and through.

McCrory has also appointed a climate science denier to head up the State Department of Environmental and Natural Resources.

McCrory’s opponent wiped the floor with him the the gubernatorial debates, but few watched. Better instead to listen to an oft-repeated  ad signifying nothing. McCrory’s opponent had little time to mount a real campaign thanks to Bev Perdue’s late abandonment of seeking her second term giving her Lt. Governor less than a year to mount a campaign.

Lazy, duped voters now have the government they deserve. Unfortunately, the rest of us do not.  Nor do the kids of NC who need a public education.  Hold onto your hats.  There won’t be anything left of value that the state of NC does when these guys are done.