Senate Majority Leader Harry Reid correctly calls out John Boehner and the rest of the Republican House “leadership” for its utter irresponsibility as the clock ticks down to yet ANOTHER fiscal “cliff” caused by…wait for it…yep, the Republican House “leadership” themselves. It’s beyond pathetic, but sadly it’s a continuing negative effect of the 2010 teahadist tsunami, one in which way too many Democrats stayed home, apparently believing that mid-term elections don’t matter. Well, they sure do, and in fact the 2010 disaster will continue to hurt us for many years to come. The next shot at booting these extremists out of office is 2014, and all I can say is, we’d better not screw it up (at least not if we care about the future of our country)!

Wednesday News: “The Malignant Cruelty of Donald Trump”; “A Presidential Smear”; “Millions of Amy Coopers”; “The Biden vs. Trump contrast has never been so... 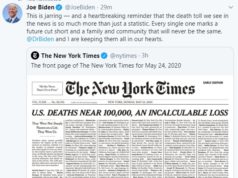 For once, right winger Jim Bacon nails it, yet again showing how far into John Birch Society craziness the VA GOP has gone https://bluevirginia.us/2020/05/northam-administration-reiterates-mask-order-to-be-enforced-by-va-dept-of-health-not-via-the-criminal-code#comment-4929894869 @vademocrats