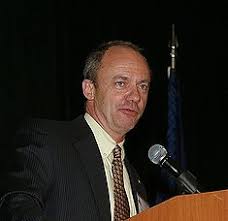 The following was posted a little while ago on former Del. Ward Armstrong’s Facebook page. It’s not a big surprise, but Armstrong’s name was still in the potential mix for 2013. This resolves that issue, leaving State Senator Mark Herring as the overwhelming favorite for the Virginia Democratic 2013 Attorney General nomination.

Since my unsuccessful bid for reelection to the House of Delegates last year I have been pondering whether to run for statewide office. Indeed, as a practicing attorney, I have strongly considered whether to seek the office of Attorney General, head of the state’s law firm. It has been a decision that I have wrestled with every day for more than a year.

My twenty years in the House of Delegates, particularly the last four as the Democratic Leader, required considerable time and attention – time that could not be spent with my family and on the operation of my small business. My public service was important despite the cost. But for the immediate future my family and my clients now deserve my focus.

Accordingly, with considerable mixed emotion, I have decided not to run for statewide office in the Commonwealth of Virginia in 2013.

I hope that my decision will not be perceived as an exit from Virginia politics. I still believe I have more contributions to make to this great state.

In affirmation of that principle I intend to dedicate considerable personal effort to the election of Democrats at all levels next year. I am firmly convinced that Terry McAuliffe can lead Virginia to a new level of economic prosperity without distraction from divisive social issues. I will do all I can to see that he is elected our next governor.

Moreover I have also pledged my support to Mark Herring, who has previously announced his bid for Attorney General. Mark and I served together as committee clerks to the state Senate in 1986 and served together in the General Assembly for a number of years. He will make a great attorney general.

I appreciate my many friends and supporters including those who urged me to run next year. I know they will understand my decision.

I look forward to next year’s campaigns and future opportunities to serve the people of Virginia.

UPDATE: Sen. Herring says, “I am grateful to receive Ward’s endorsement.  Throughout his career in public service, Ward has fought passionately for his constituents and for the Commonwealth.  I appreciate his confidence that I am the right person to carry our party’s banner as its nominee for Attorney General in 2013.”