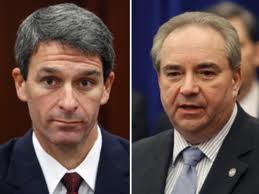 Remember the Cold War philosophy of Mutually Assured Destruction, aka “MAD?” After talking in Fairfax with AG candidate Justin Fairfax (he hasn’t even been elected and yet the they already have named the state’s biggest county for him and not Mark Warner. Don’t think the state’s senior senator hasn’t noticed.) about the history of Democratic nomination contests in the modern era, I drove back to Richmond late last night going over the 2013 political dynamics. The canceled primary between LG Bill Bolling and AG Ken Cuccinelli captured most of my thinking on the drive down I-95 after rolling through some fog on Highway 123.

According to LG Bolling, the K-man has never reached out to the Bolling camp since the VA GOP made the unprecedented decision to switch back to a convention process, after having voted for a 2013 GOP gubernatorial primary. This AC/DC move happened several months ago. Thus the failure of Cuccinelli’s camp to reach out to the Bolling camp is intentional,  a “your momma” move.

But this MAD situation is far more mutual than Bolling lets on. This is as much a battle of consultants as it is a battle between Bolling and Cuccinelli. The LG’s main honcho is his long-time advisor, Boyd Marcus. The AG’s lead guru is Chris LaCivita, a new generation political guy on the GOP side of things. Two very skillful players, and mostly “take no prisoner” kinds of guys.

Bolling has been a loyal GOP henchman, what they use to call an apparatchik in the days of the old Soviet Communist party. He is anything but the anti-establishment guy who supposedly can’t back the GOP candidate this time due to matters of high principle.

Bolling as Mr. Principled Independent? Puhleeeeeeze, gag me with a spoon as the Valley Girl in Frank Zappa’s day said. Boyd surely has to laugh whenever the media plays the “principled independent” line. But it is good for Bolling right now, and Boyd knows that.

Thus, the “Bolling goes three-way” play started out as a way for Boyd to put a gun to Cuccinelli’s head. As the Fram oil filter ad proclaimed, you can either pay us now or pay us later. Boyd tried the same thing in 1996 with John Warner, running Jim Miller against him in the GOP Senate primary. It didn’t work. But this type of hard ball has been going on since the days of Hamilton and Burr.

Cuccinelli and Chris know Bolling is no principled independent called by the political gods to offer a third choice in the governor’s race because he doesn’t think the other two contenders are up for the job. They surely get really mad whenever the press uses it as a way to push Cuccinelli to the right, although to be honest, he really doesn’t need much help on that front.

But that’s not really the point, is it? Cuccinelli wants to get elected, and Chris wants to win. Bolling doesn’t want to spend his days a persona non grata in his own party, the same for Boyd. They have said as much publicly.

Thus for Cuccinelli’s side not to reach out to Bolling – to use the Governor as a bridge if need be – can only mean: Chris either can’t control his candidate (really bad), or he agrees with his candidate’s refusal to reach out to Bolling (even worse), or they think a non-endorsement from Bolling is no big deal (this is probably true but it will hurt on the margins for sure), or they believe an independent Bolling candidacy will not hurt them in the final analysis so let the LG run (this defies all logical deduction).

MY GUT: This MAD scenario stems from 2009. If you remember, there was a lot of McDonnell-Bolling joint stuff in 2009, without a lot of Cuccinelli. This didn’t go unnoticed on the Cuccinelli side.

In my view, Cuccinelli believes – with justification – that Bolling would have preferred Cuccinelli to lose the nomination (did Boyd Marcus work against him?), or lose the general election in 2009. Why? The LG suspected Cuccinelli would not “wait his turn” in 2013.

So when it comes to putting the words Cuccinelli and Governor in the same sentence, it is clear Bolling becomes irrational, through his own delusions of grandeur, or feelings of revenge. Boyd Marcus can’t reason with his client on this subject. So instead of talking him off the ledge, Boyd decided this way: let me use the leverage of a threatened three-way race to get a good quid pro quo from Chris and the Cuccinelli side.

But given the emotions and the players, the toxic political brew has gotten worse, not better. Bolling is now like Buzz in the famed drag scene with James Dean in “Rebel Without A Cause.” They were racing toward a cliff overlooking the Pacific Ocean, the one to to jump out of the car first the “chicken.” Buzz went over the cliff to prove he wasn’t a chicken.

I believe Boyd has miscalculated here: he thought for sure Chris would make them the Godfather offer by now, one they couldn’t refuse. This made practical sense. A marriage of convenience true. And Bolling and Boyd would want their quid up front: they would not want to be holding any IOU’s hoping to collect after Cuccinelli won.

But Chris figured that in the end, Boyd would talk Bolling off the ledge. Chris had to figure he could call the B-boys bluff and arrive at some mutually beneficial agreement. He had to figure the three-way talk was a bluff.

Unfortunately, both consultants have misread either what the other wants to do, or can do. This is the reason the MAD philosophy had Eisenhower so concerned; even Reagan wanted to pull back in Iceland at his Summit with Gorbachev.

Bolling is getting fairly close to the “Fail Safe” point in the famed novel, that point where the US Air Force Bombers headed for Moscow in response to an apparent Soviet First Strike can’t be called back. The Mission is HOT and all hell breaks loose. Right now, they are at DEFCON 4 in the Virginia GOP. DEFCON 5 is War.

Would Boyd break with the GOP, with his partner Ray Allen and with Eric Cantor, to help Bolling run for governor as an independent? It is looking more and more like a YES. This is quite a development for those who have followed Virginia politics over the years. It is Hamilton and Burr all over again.

If this happens, then the move to a convention – despite Cuccinelli having a huge lead in the primary polls – might turn out to be one of the dumbest political decisions in state history. Under Virginia law, if Bolling ran in a primary and lost, he is banned from appearing as an independent on the general election ballot.

Pay me now, or pay me later: Boyd and Bolling wanted their chance at the voters, and it seems they are determined to get it one way or another.