(UPDATE: I’m hearing that the Southern Association of Colleges & Schools (SACS), which recently put UVA on “warning,” is itself under investigation by the US Department of Education… – promoted by lowkell) In this morning’s news roundup, I linked to the Virginia Pilot article on University of Virginia Rector Helen Dragas, and specifically her “tough road to confirmation in the General Assembly after spearheading a controversial effort last June to oust U.Va. President Teresa Sullivan.” I saw that Sen. Ralph Northam, who is running for the Democratic nomination for Virginia LG, was quoted in the story, sounding somewhat “sympathetic” (the article’s adjective) to Dragas. I wanted to check with Northam’s people, as well as with the other Democratic LG candidate, Aneesh Chopra, to find out more.

I first spoke with Aneesh Chopra’s campaign. Their position is basically that, knowing what he knows now, he would not support Dragas’ reappointment to the UVA Board of Visitors. Of course, they emphasized to me, that if Chopra was in a position to vote on this, he’d want to sit down with Dragas and hear her side of the story. He’d also want the entire process to be conducted with openness and transparency, both of which his campaign emphasized are very important to him.

As for Sen. Northam, his campaign told me that more than anything, he wants a fair, transparent process. They noted that a LACK of transparency was a big part of the reason the situation turned into the problem that it did. Thus, Sen. Northam believes there should be a full, fair public hearing on this issue before the Senate Privileges and Elections Committee. Northam also wants to speak with Dragas again (he’s spoken with her previously but has additional questions/concerns),  as well as to talk to UVA President Sullivan and to other members of the UVA Board of Visitors, so he can get the full story. Having said that, Sen. Northam clearly believes that Dragas made some “grave mistakes,” and he has “a lot of reservations” about her reappointment. He’s heard a tremendous amount from constituents on this issue, and people clearly feel VERY strongly about this subject. In the end, Sen. Northam will listen to his constituents, as well as to the facts, and then make a decision.

My position? I agree that Dragas should receive a fair, open hearing. I agree that all facts that should be heard. But having said all that, I find it difficult to imagine what facts could possibly emerge that would outweigh the damage – both actual and perceived – that’s already been inflicted due in large measure to Dragas’ ham-handed, arrogant, foolish, irresponsible behavior. Thus, barring some astounding revelations, I would strongly support Dragas’ reappointment to the UVA Board of Visitors being REJECTED by the General Assembly. 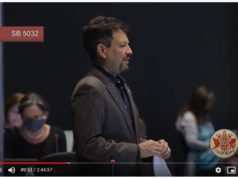