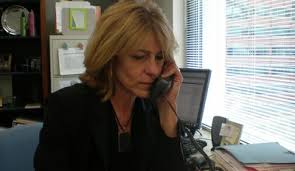 From the Democratic Party of Virginia; yet more evidence, as if any’s needed, that Ken Cuccinelli is as extreme as they come. No, he’s not bipartisan (I love how he claims to be while disparagingly referring to the “Democrat” Party), nor is he in any way a reasonable, sane human being. I mean, c’mon, if you can’t support the Violence Against Women Act, then what else is there to say about you?

Richmond, VA – Today on a conference call with Virginia media Delegate Jennifer McClellan and Arlington County Commonwealth’s Attorney Theo Stamos condemned the failure of the U.S. House of Representatives to reauthorize the Violence Against Women Act and asked Attorney General Ken Cuccinelli to explain why he refused to join 47 other state Attorneys General in asking congress to pass the law.

“If Ken Cuccinelli has proved anything, it’s that he’s not shy about injecting himself into federal issues,” said McClellan. “From lawsuits over health care, environmental protections and even academic freedom at the University of Virginia, our Attorney General has never hesitated to use taxpayer resources to pursue his own activist agenda.

“In light of that activism, Virginians deserve to know why he was one of only three Attorneys General in the country who refused urge congress to reauthorize this law that is so important to preventing domestic violence in Virginia.”

Stamos continued, “As the Commonwealth’s Attorney for Arlington County I have seen all too closely the devastating impact that domestic violence has on Virginia families and our community as a whole. That’s why a law like the Violence Against Women Act is so critical to preventing domestic violence and prosecuting the criminals who commit these horrible acts.

“I was disappointed to see Republicans in Congress fail to pass the reauthorization, and to see our own Attorney General refuse to support it while such critical support for domestic violence victims and prevention efforts hung in the balance.”

Cuccinelli was one of just three Attorneys General to refuse to sign his name to a letter asking the U.S. House to reauthorize the law that provides valuable domestic violence prevention services and support for victims. He has yet to explain what about the law he deemed unworthy of supporting to his fellow Republicans in congress.

Since its passage in 1994 the Violence Against Women Act has offered resources for state and local domestic violence prevention and victim support programs. The failure of its reauthorization last week puts critical support for law enforcement, prosecutors and community groups across Virginia at risk.