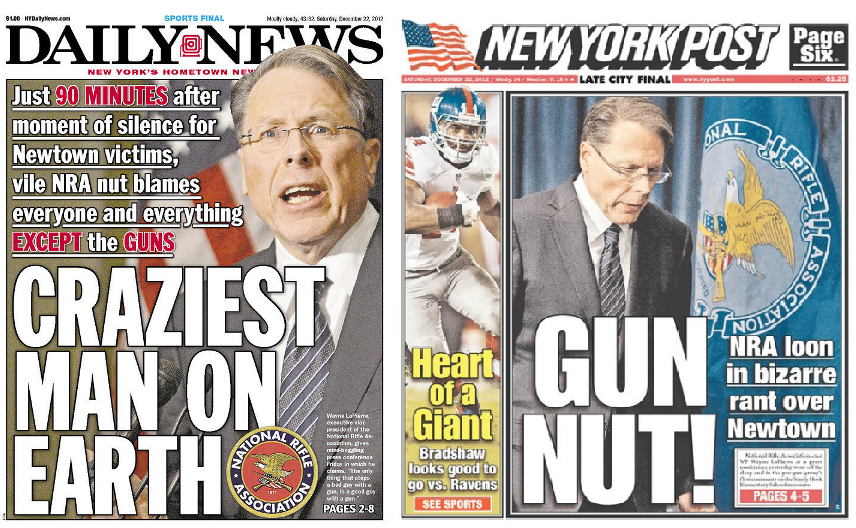 The debate about gun control has raised the usual themes, centering around the Second Amendment and the sacred right of a free citizenry to bear arms versus the outraged sentiments of victims of gun violence and their loved ones— a debate  with such limited parameters that it could take place nowhere  else in the world but in the  United States of America. Every time we have another mass carnage, Second Amendment buffs immediately claim the answer is to arm everyone, so the “deranged” shooter could be stopped in his tracks by a well-armed good guy… thus turning a settled, civilized society into a Wild West shoot out. “Guns are the answer to more guns.” If this sounds counter-intuitive, that’s because it is.

What’s missing from the debate are two other bedrock myths beloved by conservatives: personal responsibility, and the profit motive— two equally sacred themes running through American political discourse. Consider how the conservatives demand that people take “personal responsibility” for their retirement, think about the “makers” and “takers” and how the right wing dismisses the poor as slackers. Also, consider how they believe that everything society needs can be provided by private enterprise for a profit—- if there is no profit to be had, then society must not need it. We use taxes and tax loopholes to encourage behavior we think beneficial for society as a whole. So, why not apply these principles to the gun debate?

Let us require every gun to be registered, and every gun owner to be licensed. The owner is thereafter one hundred percent liable for whatever that gun does. Therefore, if that gun is stolen or given away, and used by someone else, the original owner is liable for what the gun does in these other hands. If the gun kills a dozen people, then the owner of the weapon can be sued; he is as guilty as the actual shooter. He should have kept his gun safely locked up. Liability would force gun owners to show respect for their weapons; they would not only have to be very, very careful about security, they would probably want to buy insurance to protect them from such law suits. A whole new cottage industry providing private profit would spring into being, and you can be  sure the insurance companies would require certain security measures from the gun owner whom they are insuring…. Personal responsibility on steroids.

The day of the minuteman militia (the gun over the mantel, ready to hand when Indians or redcoats attacked) is passed. We no longer live scattered across a thinly populated frontier, but crowded together in densely populated cities.  New lifestyles require new mores. My father was from South Carolina Low Country, I grew up with a man who hunted regularly, and kept his guns in a locked cabinet (the key on his person), the ammunition locked away elsewhere. One of my earliest memories is watching my father clean his guns, lovingly and with respect. He was also an infantry officer, and guns were his profession. He accepted personal responsibility for his weapons. It is time today’s gun owners acknowledged their personal responsibility.

Friday Night Update from the ER in Arlington, VA: “It’s very rare to see masks outside of the hospital now. Trust me, I get...