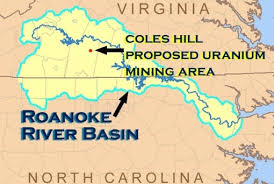 Richmond. The longtime Chesterfield maven got a good chunk of the Capitol City in the 2011 redistricting. He proved radioactive for city folk, losing the urban vote badly. But he had far more suburban constituents and won, although a lot closer than he had thought.

Not being deterred, he has now tried to split the atom by leading the charge to overturn the state’s longtime ban on uranium mining in Pittsylvania  County in Southside, home to about 65,000 citizens. He is now willing to keep the ban elsewhere as long as they can dig up the yellow cake there.

I don’t claim to be an expert on the good, bad and the ugly of uranium mining. But it doesn’t take a weatherman to know which way the wind is blowing politically in a statewide race for Governor, LG or AG on the subject.

With all due respect to the hugely compensated folks advising statewide candidates, this is not a hard call as a matter of political strategy.

For Democrats, I would even say the following: It is a No Brainer, as in having a brain actually makes it less likely that you will pick the right strategy here.

That’s right: Better to have had your brain cells zapped by radioactivity, since then for sure you would say NO. Or as Laurie Morgan sang: What about NO don’t you understand?

Now, this is not to say you shouldn’t make the decision based on how you read the merits. But I am writing about 200-proof politics today — no emotion, straight votes, don’t make it complicated by things like policy or will you still respect me in the morning. We are talking votes, or more precisely, NET VOTES.

Most of the people in Southside who support uranium mining are going to vote for the GOP candidate for Governor, LG and AG no matter how they come down on uranium mining. There is a minority who could go AC/DC on you, but not many. SO ANY DEMOCRAT WHO THINKS HE CAN GAIN MUCH BY BEING FOR IT is standing too close to a nuclear reactor.

If his or her GOP opponent came out against The Atomic Senator and his Democratic GUV nominee backer, this would move some DEM votes in Southside into the GOP column, plus give the GOP candidate bragging rights in Virginia Beach and its 400,000 residents!!!

In Virginia Beach, they get their water from a pipeline running right through the Southside area, which The Atomic Senator wants to turn, as they see it, into fish and chips: dead fish and chips of uranium mining waste that could get into Virginia Beach’s water supply.

How likely is that? I don’t know, but who ever thought Iran would get all that enriched uranium either, much less enough to build an Atomic Bomb or two, or twenty?

The political point being: On the No Mining side of the vote calculator, you’ve got VA Beach, a key bastion of swing votes in a statewide election; the environmentalists; and the good government types who are going to see any lifting of the ban on uranium mining as a corrupt special interest deal. Moreover, and let’s really get to where the rubber meets the road, this is a largely educated, upscale swing group of voters, disproportionately white and female if you drill down. THIS IS A KEY GROUP FOR ANY DEMOCRATIC STATEWIDE CANDIDATE. Also, in this case, you have a small but important constituency of anti-uranium folks in Southside who will vote in November.

Net, net: Given the NO side, there is nothing on the YES side of the scale which could possibly make a DEM want to be seen as pro-uranium mining. Campaign dough? Talk about radioactive!  I suppose one could try and split the political baby.

BUT IN THE END, YOU ARE EITHER GOING TO BE SEEN AS AGAINST IT: OR NOT. It is thus a NO BRAINER FOR TERRY MAC AND HIS POSSE.

As for Kenny C., the issue shows why he really doesn’t want to stay all that long as AG. First, given that the matter could wind up in the courts, can he really comment on it without compromising his office? I think he can, but maybe he doesn’t think so, maybe the public will not think so. That’s why he should be resigning unless he wants the cover to say nothing.

AS TO THE POLITICS HOWEVER: Whatever your view of the AG’s proper role in this stuff as a matter of office policy, the 2013 politics is clear: Cuccinelli and posse have a tough call. THEY HAVE TO ALIENATE TO A LARGER OR SMALLER DEGREE ONE CONSTITUENCY OR ANOTHER.

On this issue, at the end of yada, yada, yada of political speak, you are either going to support allowing the mining to go on with greater or lesser regulation — or you are not.

Long Vote Story Short: The NO side is the net, net winner easy.

As a matter of pure 200-proof politics, the pro-mining folks can not disprove a negative by election day: that is to say, they can’t disprove mining is unsafe. If the GA approves uranium mining, the Democrats need to run on a “No Mining Until Proven Safe” platform. Not as strong as the “No Car Tax” of Gilmore and posse in 1997.

But as the saying goes: It will do for government work right now.