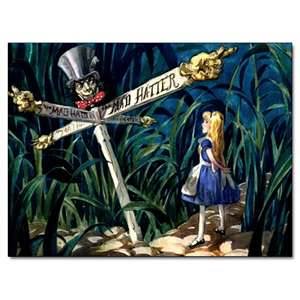 “If you don’t know where you are going, any road will get you there.”

The above quote is usually attributed to Lewis Carroll, although the actual lines in Alice in Wonderland may be even more relevant to the current transportation debate in Virginia.

“Would you tell me, please, which way I ought to go from here?”

“That depends a good deal on where you want to get to,” said the Cat.

“I don’t much care where–” said Alice.

“Then it doesn’t matter which way you go,” said the Cat.

“–so long as I get SOMEWHERE,” Alice added as an explanation.

That, in a nutshell, is how I’m feeling about the current debate over Gov. McDonnell’s recently-unveiled transportation proposal, including elimination of the gas tax, an increase in the sales tax, increase, a $15 increase in vehicle registration fees, a $100 alternative fuel vehicle fee, and moneys from supposedly forthcoming federal legislation on marketplace equity.

Why do I feel this way? Very simple: Because in all this debate to and fro, I defy anyone to identify an actual concept, clue, foggy notion, vague idea, let alone a serious VISION of where we want Virginia to be with regards to transportation and land use in 10, 20, 30, 50 years. For instance, do we want to raise money for transportation in order to: a) continue the same pattern of cheap-fossil-fuel-dependent, sprawl development we’ve been doing for decades now (the Sprawl Forever! approach); b) in order to accomplish “a,” spend most of any new transportation revenues on new and existing road infrastructure for moving motor vehicles; c) completely change direction to a “smart growth,” “high-density development” approach (see the Coalition for Smarter Growth), wherein transportation moneys are allocated overwhelmingly towards things like bicycle and pedestrian upgrades, Metro (bus and rail), other light rail systems (e.g, streetcars), high-speed rail, and other urban/inner-suburban-friendly modes; d) go in some sort of hybrid direction of all this; e) other? Right now, can anyone tell me which direction Bob McDonnell wants to go? How about any other top Virginia politician? In 2005, when Tim Kaine was running for governor, he talked about more closely linking  land use and transportation planning, and that was good as far as it went, but how much of it has been incorporated into Virginia’s long-term transportation funding and overall thinking? I’m not seeing it, are you?

The problem: In lieu of having any clue where we’re going, the tendency will be towards inertia, as the laws of physics (and humanity, for that matter) tell us. In the Virginia transportation context, I suppose if you’re thrilled where we find ourselves now (crumbling roads and bridges, sprawling development patterns, wildly inefficient  – and environmentally damaging – use of energy resources and land, etc.) then you should be thrilled with inertia. If, on the other hand, you are NOT happy with where we’re at right now, then presumably you should want a significant change in direction.

No matter what, you’d think that we should be having the debate over where we want to go first, BEFORE we start arguing over how much money we need to raise and how to do so. Again, to paraphrase Lewis Carroll, if we don’t know where the heck we’re going, then any road (or streetcar, bike trail, Metro line, etc.) will get us there. But why would anyone in their right mind want to make policy this totally bass-ackwards way (come up with some money, then figure out what the heck we want to do with it, but NEVER really decide what our long-term transportation vision is). It almost makes me feel like Alice in Wonderland myself, in the sense of the following classic lines of dialogue. Enjoy. 🙂

“But I don’t want to go among mad people,” Alice remarked.

“You must be,” said the Cat, or you wouldn’t have come here.”