(Also see Sen. Chap Petersen on this topic at his blog, OxRoadSouth. – promoted by lowkell) 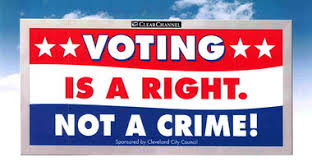 Since Governor McDonnell and Attorney General Cuccinelli are strict constructionists when it comes to constitutional law, they should agree with me: There is no current VA Constitutional bar to implementing the automatic rights restoration process Mr. McDonnell discussed last night. True, the discussion on this issue has always assumed a new Constitutional provision would be required.

But an analysis of the relevant Clemency Power section suggests otherwise.

Last night, the Governor said “it’s time for Virginia to join most of the other states in the country and make the restoration of civil rights an automatic process for nonviolent offenders in our state.” The issue of automatic restoration of such rights – a second chance as it were – for those having, as the saying goes, having”paid their debt” to society has long been a controversial issue in Virginia. Perhaps the “Nixon Goes To China Rule” explains why Republican McDonnell is the first Governor to truly put the full prestige of the office into the fray for what has basically been a major issue for a key caucus of top Democratic leaders in the General Assembly. McDonnell has made concerted effort to approve more restoration of rights petitions than roughly all the other chief executives in the modern history of the commonwealth COMBINED.

So it is not my intention in any way to suggest the Governor has been anything less than sincere in his commitment here, rooted to some considerable measure in his strong religious beliefs. Such conviction is to be admired.

But a good commentator likewise has to be true to his beliefs: and in that regard, you call it like you see it based on the key metric, in this case legal, of the matter at hand.

That being the case, the situation is thus: There is nothing in the Constitution of Virginia which prevents Governor McDonnell from de facto creating the very automatic process he and others – such as Richmond area Delegates Peter Farrell and Jen McClellan along with my Senator Don McEachin – want to make de jure part of the Virginia Constitution.

While the distinction between de facto and de jure is fundamental as a legal matter in this area, that is for another discussion.

But since there is little reason right now to expect such a Constitutional Amendment to pass anytime soon  – in theory, it could become law as of January 1, 2015 if the General Assembly acted with all haste and the voters gave it their approval in a referendum – the question of whether Governor McDonnell, or the next Governor could institute the process by executive action is ripe for analysis today.

The power of the Governor to restore civil rights – the right to vote for example – derives from the state Constitution, specifically Article V, Section 12 entitled Executive clemency:

“The Governor shall have power to remit fines and penalties under such rules and regulations as may be prescribed by law; to grant reprieves and pardons after conviction except when the prosecution has been carried on by the House of Delegates; to remove political disabilities consequent upon conviction for offenses committed prior or subsequent to the adoption of this Constitution; and to commute capital punishment. He shall communicate to the General Assembly, at each regular session, particulars of every case of fine or penalty remitted, of reprieve or pardon granted, and of punishment commuted, with his reasons for remitting, granting, or commuting the same.”

As a general matter, the clemency power is beyond the authority of the legislative branch to restrict and the judicial  branch to review.  There are limited exceptions. But to the best of my knowledge, there is no court case, state or federal, which definitely would deny the Governor of Virginia the power to create a de facto automatic process for the restoration of the civil rights – or say only the right to vote if he or she wanted – of someone who met the nonviolent example contemplated by McDonnell in his speech last night.

Here’s why.  As we can see from the Constitutional provision above, the Section 12 power is given without any reference whatsoever to the General Assembly. This was purposeful as the courts have discussed.

In the constitutional language, the operative part as to voting rights for example would be the language says the Governor could “remove political disabilities consequent upon conviction for offenses.”  This is not in dispute. But what is interesting, as a matter of strict constitutional construction favored by McDonnell, Attorney General Cuccinelli and conservatives generally is how the second paragraph of Section 12 when compared to the first paragraph. The first paragraph has four categories: (1) fines and penalties, (2) reprieves and pardons, (3) political disabilities, and (4) capital punishment.

However, then look at the second paragraph. It addresses what the Governor “shall communicate” to the General Assembly has regards his actions on the 4 categories above. This part of Section 12 says he must tell report to the General Assembly the “particulars of every case of” of (1) fine or penalty remitted, (2) reprieve or pardon granted, and (4) “punishment commuted”, providing the Governor’s “reasons for remitting, granting, or commuting the same.”

As a matter of statutory construction therefore, Section 12, approved by the people, clearly leaves (3) out of the equation in the second paragraph. Restoring someone’s civil rights does not amount to a fine or penalty remitted, it is not a reprieve or a pardon, and would not be a “punishment commuted” since this part of the Constitution addressed a clemency decision to “commute” a sentence of capital punishment. As a matter of strict Constitutional construction, there is no command in Section 12 requiring the Governor to report to the GA every case of his restoring a “political disability” and proving the reasons for such executive action.

So as a matter of constitutional law, Section 12 seemingly leaves open to the Governor the right to set up an automatic process, based on his or her standards, to restore say the right to vote or other civil rights without the current exhaustive, case by case analysis, substituting instead the kind of formulation Mr. McDonnell had in mind in his speech last night.

Thus, for example, there is bright line constitutional bar from Governor McDonnell to make the appropriate state or local authority automatically provide forms to be signed by any nonviolent offender upon that individual meeting the pre-set standards for petitioning the Governor to have his or her rights restored, or in fact, having said paperwork submitted to the Governor without the offender’s knowledge by the appropriate state or local official.

BOTTOM LINE: The four corners of Section 12, as written, and interpreted according to general principles of construction, would stand for the proposition that without a specific restriction, the clemency powers of the executive are to be defined conservatively, that is to say strictly against any reduction not plainly in the Constitution. The history of such powers, dating back to the King of England, has been to view said authority as an act of charity by the state, left to the conscience of the leader. There may be customs, and the like associated with exercising the power. But they are only as relevant as the current Governor believes them to be as a matter of personal decision.

The Virginia Supreme Court might ultimate find my reasoning less than persuasive if so claimed by a Governor. But as a bottom line matter of law, the plain reading of Section 12 indicates that Governor’s were to be given more leeway, in terms of the decision-making, when it came to restoring a political right than in terms of matters of financial restitution, the general matter of the particular criminal record, and the issue of commuting a death sentence demanded by a judge or jury. This dichotomy seems very reasonable given the nature of the four categories at issue.

No matter what you’re doing today, pause for a moment, look up into the heavens, and reflect that tomorrow @NASA plans to fly a helicopter on Mars. Wow.