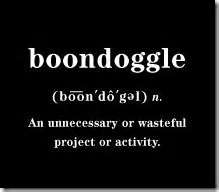 This transportation deal is atrocious enough, for the reasons I’ve outlined below (and that Paul Goldman has chimed in on regarding the “200-proof politics”), that it should be deep sixed unceremoniously no matter what. Having said that, at least if the revenues raised from the proposal were slated for worthwhile projects – ones that made sense in terms of Virginia’s future, ones that were cost effective, ones that helped make our lives and our environment better and not worse, ones that encouraged smart growth and not sprawl development – than perhaps there would be some redeeming value here.

But no. Not even close. Instead, believe it or not, the Virginia Department of Transportation is planning (see slide 5) to take $869 million in Garvee Bonds (see here for more on what those are all about) to spend on two wasteful, boondoggle, environmentally harmful projects — Route 460 (see here for why this thing is an utter waste of money) and the Coalfields Expressway (aka, “Mountaintop Removal Masquerading as a Highway Project”).

That $869 million represents over two-thirds of the $1.2 billion in Garvee bonds authorized by the General Assembly in 2011. This will reduce funds available for much higher priority, far more beneficial projects. Add in the Charlottesville Bypass ($243 million, with estimates up to $400 million; see here for a demolition of that “road to nowhere”) and the “unneeded and wasteful Outer Beltway” (estimated cost: $1 billion) to Route 460 ($1.4 billion) and the Coalfields Expressway ($2.8 billion), and total spending on wasteful, environmentally damaging, unnecessary projects ratchets up to a potential $5.5 billion. Clearly, the traffic numbers do not justify these highways, and the money is being diverted from much higher priority needs (e.g., our statewide maintenance backlog, needs in the heavily congested parts of the state’s metro areas, and local transportation needs statewide).

I checked with Coalition for Smarter Growth Executive Director Stewart Schwartz, and he responded:

Completely missing from the debate has been any review of how VDOT has been spending the $3 billion in borrowed money the General Assembly approved in 2011. Much of that is being squandered, as demonstrated by the billions being spent on four unnecessary rural highway projects. The proposed deal lacks any oversight of how VDOT will spend the additional statewide funds.

Great, huh? In sum, we get a regressive plan that takes money away from education and health care in order to fund wasteful, environmentally damaging, and unnecessary road projects. Are you sold on this monstrosity yet? Yippee!