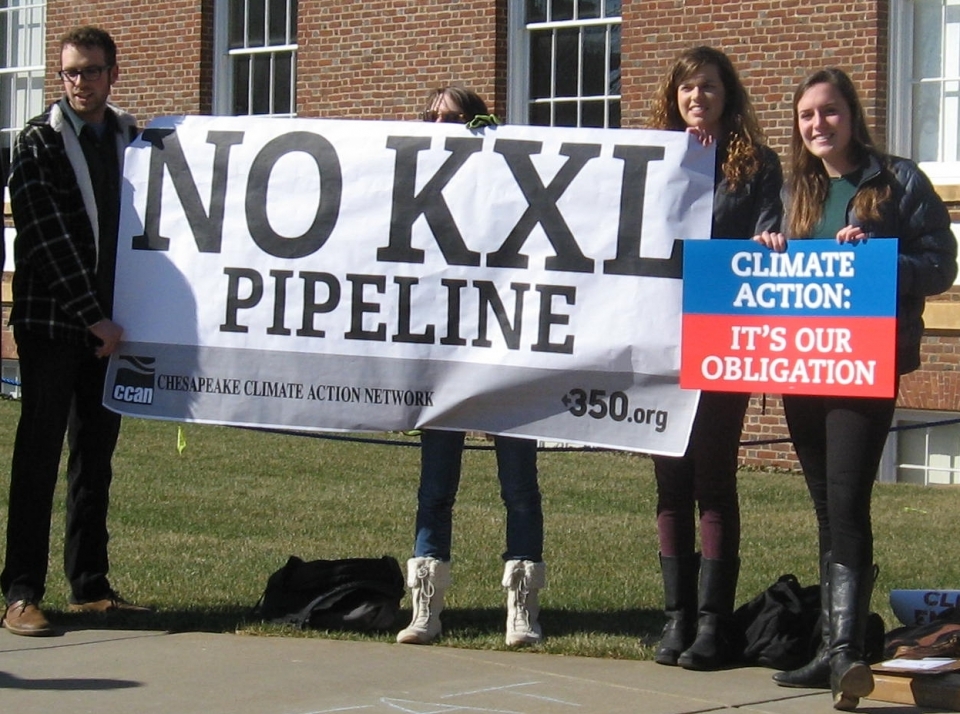 Virginia climate activists aren't letting up on Keystone XL after Sunday's hugely successful climate rally in DC. John Kerry came to the University of Virginia today to deliver his first official speech as the Secretary of State, and UVA students with the Chesapeake Climate Action Network and Central Virginia 350 turned out to urge him to oppose the dirty oil pipeline.

Armed with a huge banner and chanting "No tar sands pipeline!" the group drew attention from passersby and Secretary Kerry himself, who walked by with a wave to acknowledge our message. During his speech, Kerry came out swinging on climate change. He made the economic case for climate action, tying rising seas and higher temperatures to greater costs from extreme weather and other climate impacts.

Secretary Kerry is right – we need to see climate action and we need to see it now. He and President Obama have a great opportunity, a great responsibility, to match their words with action. If built, the Keystone XL pipeline would be a fuse to one of the biggest carbon bombs in the world: the immense and dirty tar sands fields of Alberta, Canada. Climate scientist James Hansen has said that fully exploiting the tar sands would be "game over for the climate."

Virginians  know firsthand the impacts of our heating planet. The city of Norfolk is second only to New Orleans in vulnerability to sea level rise in the United States. Private insurers have already begun denying coverage to coastal residents, who see the rising tide lapping at their front doors. Farmers and vineyard owners around Charlottesville and across the state are threatened by hotter summers, increased likelihood of drought and shifting growing seasons.

For the sake of all those on the front lines of climate change, for the sake of our future, Secretary Kerry and President Obama must reject the Keystone XL pipeline and transition our country to clean, renewable energy like wind and solar power.

Today we reminded Secretary Kerry of his responsibility to take action on climate change and oppose the pipeline. Tomorrow, and the day after that, and the day after that and until we see the action the climate crisis demands, we'll keep emailing and calling and showing up to tell them: NO KEYSTONE XL. Add your voice today by emailing President Obama a  message urging him to reject the tar sands pipeline.

Cross-posted from the blog at ChesapeakeClimate.org

Rep. Donald McEachin Leads More Than 30 Colleagues in Letter to FWS to Save the American Red Wolf https://bluevirginia.us/2021/03/rep-donald-mceachin-leads-more-than-30-colleagues-in-letter-to-fws-to-save-the-american-red-wolf