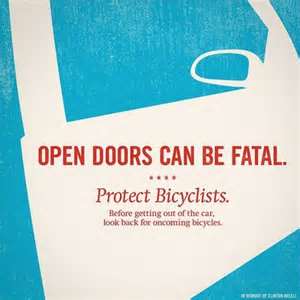 First, here’s the vote in the House Transportation Committee on SB736, Sen. Chap Petersen’s bill to make “dooring” a cyclist a crime, punishable by a fine of up to $100:

Now, here’s the vote on the immediate next bill, SB770, ironically on driver improvement (including how to open the car door without endangering a cyclist, perhaps?!?) clinics:

Finally, here’s a list of Delegates who filed their “intent” after the vote on Chap’s “dooring” bill was taken: Del. Richard Anderson (R) was absent, said he intended to vote yea (hmmmm); Del. Jeion Ward (D) was absent, said she intended to vote yea (also hmmmm); everyone else (Rust, Hugo, Comstock, Habeeb, BaCote) walked in immediately afterwards, but did not file their intent. Some claimed they had to be in Commerce and Labor, as the Washington Post’s Tom Jackman reported in his story this morning, if you buy that excuse. I don’t.

So, what we have here is a bunch of lame excuses. The bottom line is that these people were fully capable of voting on the bill following Chap Petersen’s “dooring” bill, so why couldn’t they have voted on “dooring?” Sorry, but I simply don’t buy the (mostly lame) excuses. In particular, I’d like to single out several Republicans from Northern Virginia districts – people like Tom Rust, Tim Hugo, and Barbara Comstock – who represent districts with many cyclists, who essentially just said “drop dead” to those cyclists, yet who didn’t have the guts to even cast a vote on “dooring” legislation. It’s pathetic, and I certainly hope that voters remember it in November.