(FYI, this lunacy is coming up on the Virginia Senate floor today, so make sure you call your Senator! – promoted by lowkell) 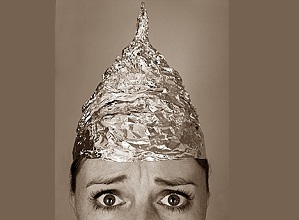 “The UN is Coming, the UN is coming! Don your tinfoil hats and vote for HJR 654, by Delegates Lingamfelter, Hodges, O’Quinn and Peace.

RESOLVED by the House of Delegates, the Senate concurring, That the General Assembly recognize the need to oppose United Nations Agenda 21 due to its radical plan of purported “sustainable development,” and that the General Assembly recognize the policy’s infringement on the American way of life and individual freedoms and ability to erode American sovereignty

Speaking truth to lunacy: When HJR 654 comes to the floor of the Virginia House of Delegates there are only two reasons to vote for this resolution: One has to be either crazy enough to believe this conspiratorial lunacy or so fearful of the loonies promoting it that one bows to their pressure.