I just got back from Ken Cuccinelli’s book signing at the Barnes & Noble in Tysons Corner (and no, I wouldn’t buy one of his books if it was the last book on earth, I was stranded on a desert island, and I was absolutely desperate for something – anything! – to read). There was a long line of people waiting to get their book signed, including several members of the anti-Cuccinelli group Cooch Watch 2013. What I found perhaps most interesting was how anxious Cuccinelli obviously was to keep the public from asking him questions in a freewheeling fashion (e.g., as in a normal book reading/Q&A session). Also, I was surprised how much security there was (note that it was already pretty secure being deep inside a large shopping mall, with no direct access from the street, and with no ability for anyone to protest right outside the store), including people standing to Cuccinelli’s left and right. I asked one of them if he was with the campaign, he said “no sir.” I asked him if he was with the book store, he said “no sir.” And that was that. Who the heck knows, but they made it VERY clear that they wanted nobody getting anywhere near Cuccinelli, unless they had bought a book and were willing to proceed, one at a time (under watchful eyes of security) to have the book signed. Hmmmm.

P.S. Also, see the “flip” for a photo of the “Cooch Watch” folks at the event by Gail Gordon Donegan. As Gail colorfully describes the scene: “Waiting in line with tea partiers is strange. The men look sociopathic and the women look broken. They all have haunted eyes.” I simply can’t understand how anyone in their right (as in “sane,” not politically “right”) mind could support this extremist, theocratic, anti-LGBT, anti-women, science denying sockpuppet of the Koch brothers. Of course, this is the mindset we’re dealing with. Ugh.

P.P.S. Gail Gordon Donegan adds, “Cooch deflected my friend’s questions about Medicare and Social Security, and he wouldn’t even entertain my questions about abortion and the First Amendment. So, there you have it. He stayed about one hour.” 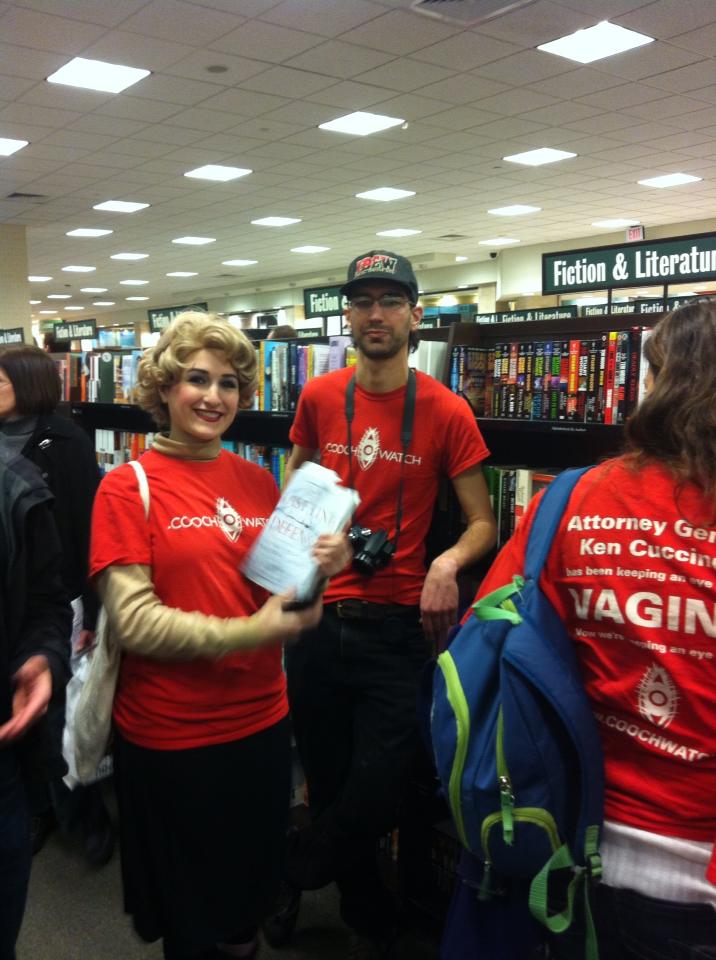 Speaker @EFillerCorn on Republican VA House of Delegates candidate comparing being a conservative teacher in Fairfax to the Nazi Holocaust: "This gross display of antisemitism is completely unacceptable, nor should it be used in our political discourse" https://bluevirginia.us/2021/07/greater-washington-jewish-community-dismayed-by-two-va-gop-house-of-delegates-candidates-making-offensive-remarks-minimizing-the-holocaust#comment-5476653944

Jewish Community Dismayed by Two VA GOP House of Delegates Candidates Making Offensive Remarks Minimizing the Holocaust ("Ms. Perry acknowledged regret for her choice of words but did not offer an apology for the hurt she caused to the Jewish community") https://bluevirginia.us/2021/07/greater-washington-jewish-community-dismayed-by-two-va-gop-house-of-delegates-candidates-making-offensive-remarks-minimizing-the-holocaust