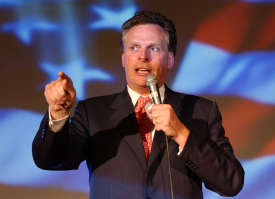 With a stroke of a pen today, Governor McDonnell could turn the 2013 gubernatorial race into a redo of 1989. All he has to do is what he has previously promised to do: sign his self-described “historic” transportation bill into law without any amendments to the four regional transportation taxes. GA Republicans and Democrats say those regional levies are legal, that Attorney General Ken Cuccinelli is wrong to call them unconstitutional.

As Yogi Berra might ask: Is it de ja vu all over again?

My position on the 2013 race has remained constant for months now: unless the Cuccinelli for Governor campaign finds a compelling narrative for electing their man to help solve an important non-social issue, he isn’t going to win. Wilder needed two miracles in 1989 to win. Unknown to everyone but the candidate, his pollster and myself, he couldn’t win without them. Even then, he barely won, the closest Virginia governor’s race in history.

Cuccinelli may not need two miracles. He may not even need one. But he will need that winning non-social issue. His social positions, without more, are too much burden to carry to victory. Cuccinelli has failed to try, much less develop, a winning non-social issue. Right now, he has the anti-tax issue. This is a staple of the GOP stable of issues. But standing alone, it has never won Republicans the governorship.

Cuccinelli can’t win as of this morning. The 2013 campaign is roughly 50% over. Republicans always think they have some magic “dark secret issue.” They said that about Wilder and Whitewater and Warner and Rev. Wright. It is all in their heads.

The Court case will shadow the campaign for the next few months. It will be framed in a way to highlight the AG’s strong suit, a consensus view in his Department of Law that the legislation is unconstitutional.  Moreover, those regional taxes are unpopular: he gets to play his best card and forces Democrats to defend them.

Bottom line: A big win for Cuccinelli in the Supreme Court could turn 2013 into 1989. Given the likely reward, it is a 200-proof unwarranted political risk.