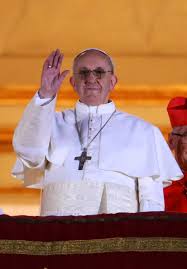 Today in Rome’s Saint Peter’s Square, over one hundred thousand people gathered to cheer a new pope.  Argentine Cardinal Jorge Bergoglio, a cardinal committed to social justice for the poor, became Pope Francis, most likely named after Saint Francis of Assisi, champion of the poor. Many Catholics rejoice in an American Pope, from Latin America. The first Latin American, first non-European, and first Jesuit is now the leader of the world’s largest faith.

President Obama greeted the news with a statement which said (in part):

On behalf of the American people, Michelle and I offer our warm wishes to His Holiness Pope Francis as he ascends to the Chair of Saint Peter and begins his papacy.  As a champion of the poor and the most vulnerable among us, he carries forth the message of love and compassion that has inspired the world for more than two thousand years-that in each other we see the face of God.  As the first pope from the Americas, his selection also speaks to the strength and vitality of a region that is increasingly shaping our world, and alongside millions of Hispanic Americans, those of us in the United States share the joy of this historic day

And the Vice-President added:

The Catholic Church plays an essential role in my life and the lives of more than a billion people in America and around the world, not just in matters of our faith, but in pursuit of peace and human dignity for all faiths. I look forward to our work together in the coming years on many important issues>

Pope Francis is a conservative and likely to uphold the church’s reactionary rules concerning married priests, birth control, abortion, and gay marriage. A Daily Kos article noted the new Pope’s fierce opposition to Argentina’s law allowing gay marriage.  And he noted that would be expected from anyone expecting to be Pope.  It is, however, a disappointment nonetheless.

As each new pope is announced over the years, those (many) of us who are expats, and who are no doubt are still included in those 1.2 billion “members” mentioned with some frequency by various media, hope that this is the one who finally gets it right, that this pope turns the corner from official church misogyny, homophobia,  contempt for women’s reproductive autonomy, and required priestly celibacy/non-marriage. We hope that the official church one day catches up to its faithful, many of (the majority of) whom love their pope, while completely disregarding his pronouncements on these same subjects. The church faithful are generally far more progressive than their official church. Many of us expats hope further that the church can be counted upon to live up to its potential as a beacon for justice for all people. It may be that this pope can do that. I hope that his sense of justice one day extends to women and the LGBT community.

Thankfully, as a Cardinal, Bergoglio renounced the lavish lifestyle cardinals are afforded in a church which values its pomp, circumstance and ritual. It is unclear this early on whether this Pope might let relinquish many of the church’s treasures and property to benefit the poor.

There is one controversial aspect to Pope Francis’s background. As the AP reports, he has tried to repair the damage to the church after it failed to stand up to the dictatorship from 1976-1983.  Thousands were disappeared and killed during the dictatorship.  For some time, Bergoglio was not very forthcoming in his public statements and even testimony concerning the dictatorship. Not even in the case of two priests,  who were tortured, was he willing to put himself out and prevent their arrest. They were allegedly handed  to death squads by Berglogio, who refused to back their liberation theology. The man who revealed this was none other than one of the priests, fellow Jesuit Orlando Yorio. Ultimately the priests were freed with the help of Bergoglio himself and ultimately told the tale. And at that point Bergoglio did show some courage, but not apparently soon enough for the priests or thousands of other Argentinians. There is more here. In 2012 Bergoglio initiated  a church apology by himself and his bishops for not better protecting his church members against the dictatorship. It is my hope that this pope shows the courage needed to advocate for social justice seriously missing in the era of extreme vulture capitalism. It is a time for moral clarity on the subject. Let’s hope.