Since I’ll be at an event tonight with Howard Dean for Democratic House of Delegates candidates Jennifer Boysko and John Bell, I thought I’d rerun this interview I did with Howard Dean on 8/15/08. Enjoy, and see you there tonight! 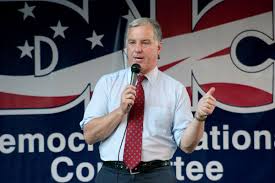 I just got off the phone with DNC Chairman, Gov. Howard Dean, who I had a chance to interview one-on-one as his “Register for Change” bus tour comes rolling through northern Virginia tomorrow (Saturday).  I didn’t record the interview, so here’s a rough transcript of my questions and Gov. Dean’s answers. (Note: thanks to Gov. Dean for taking some time to speak with RK, and I encourage everyone to help with Gov. Dean’s voter registration drive!)

Question #1: As you well know, it appears that Virginia has a serious shot at voting Democratic for president for the first time since 1964.  I’m very curious as to why you think that’s the case – for instance, do you think it’s about changing demographics, your 50-state strategy, the fact that Republicans have moved so far to the right, the rise of a strong progressive netroots movement in the state, or something else

Howard Dean: All of the above. Republicans have been an embarassment to the Commonwealth. Locally, the Republican brand isn’t so great. John McCain is a carbon copy of Bush. Virginia is a state that represents America in many ways.  I’m very grateful for the Draft James Webb movement and the netroots Webb campaign in 2006.  That really helped educate some people in Washington – like Chuck Schumer – about the importance of the blogs and the netroots.

Question #2: 2. In December 2003, you said you were “tired of coming to the South and fighting elections on guns, God and gays.”  Here in Virginia, Tim Kaine talked in 2005 about being a Catholic missionary in Honduras as a young man; there was a gay marriage amendment on the ballot in 2006; and we had the Virginia Tech shootings in 2007. During this entire period, Democrats have continued to make gains in Virginia.  In that context, nearly 5 years after you made the “guns, God and gays” comments, how do you see these issues playing out in southern states generally, and Virginia in particular?

Howard Dean: The right wing always brings up these issues because they have nothing else to talk about. They’ve been a complete failure on the economy and many other areas. Republicans are out of step with the vast majority of Americans.  People have gotten tired of all that [wedge issue] stuff. People are hurting and Republicans just give money to the oil companies. We’re in trouble economically, stuck in Iraq.  The difference between Barack Obama and John McCain on Iraq is 98 years. Republicans are putting their OWN interest above the national interest.

Question #3: Back to the netroots briefly, since I’ve recently co-authored a book on the subject, do you see the netroots continuing to rise?

Howard Dean: Every year, the influence of the netroots keeps increasing and will likely continue to do so.

Howard Dean: The  Register for Change bus will be in Fairfax and Alexandria tomorrow.  A lot of people are still not registered to vote, including young people and minorities. It’s crucial that we register as many people as possible and get them to vote early, if possible.

Question #5: Are there any particular areas of Virginia that you’re targeting, or that you see as particularly promising?

Howard Dean: Putting an emphasis on the Virginia Beach/Hampton Roads area. The military vote has been trending Democrat, just an article this morning about how members of the active military are giving more money to Obama than to McCain. Also, we are reaching out to evangelicals (especially young evangelicals), who are increasingly looking at issues like the environment, health care, etc. More broadly, a lot of young evangelicals want their leaders to get things done, not just bicker about divisive issues.

Question #6: Do you see what’s happening politically in Virginia as a “one off,” or do you think it’s part of a broader phenomenon?

Howard Dean: There’s deep change going on throughout the country. We don’t want to win without the South. We’re targeting Virginia, North Carolina, and Georgia, all of which are winnable if we can register the voters and get them out to the polls on election day.

P.S. There was an interesting moment when we were chatting about how the netroots really got kickstarted in 2003, and I mentioned that I was part of the Draft Wesley Clark movement. I quickly added that I thought that his campaign – probably even more than Clark’s – was crucial to the rise of the netroots.