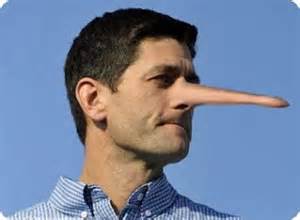 Next, see the White House statement (on the “flip”), which explains that Ryan’s “math just doesn’t add up,” that his budget “asks nothing from the wealthiest Americans has serious consequences for the middle class,” etc. I mean, if this heartless, corporate tool is what passes for a “thought leader” in the Republican Party these days, it’s truly a frightening time for our country.

Statement by the Press Secretary on the House Republican Budget

The President believes that there is an opportunity for Democrats and Republicans to come together around a balanced plan to grow the economy and shrink the deficit by investing to create jobs, cutting wasteful spending, and strengthening programs like Medicare and Medicaid.  This approach will require both parties to compromise and make tough choices.

While the House Republican budget aims to reduce the deficit, the math just doesn’t add up.  Deficit reduction that asks nothing from the wealthiest Americans has serious consequences for the middle class.  By choosing to give the wealthiest Americans a new tax cut, this budget as written will either fail to achieve any meaningful deficit reduction, raise taxes on middle class families by more than $2,000 – or both.  By choosing not to ask for a single dime of deficit reduction from closing tax loopholes for the wealthy and well-connected, this budget identifies deep cuts to investments like education and research – investments critical to creating jobs and growing the middle class.  And to save money, this budget would turn Medicare into a voucher program–undercutting the guaranteed benefits that seniors have earned and forcing them to pay thousands more out of their own pockets.  We’ve tried this top-down approach before.  The President still believes it is the wrong course for America.

That’s why the President has put forward a balanced approach to deficit reduction with no sacred cows.  It includes more Medicare savings over the next decade than the House Republican budget, but it does so by cracking down on waste and fraud, not by asking middle class seniors to bear the burden.  It closes tax loopholes for the wealthiest and biggest corporations so we can still afford to create jobs by investing in education, manufacturing, infrastructure, and small businesses.  The President’s plan puts our nation on a fiscally sustainable path and grows our economy from the middle class out.