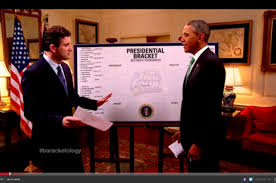 Just as Terry McAulliffe and even the President dutifully and publicly filled out their NCAA March Madness brackets, there was NPR telling listeners yesterday that it is all for naught. After all, any individual’s chances of getting the brackets right is 9 quintillion to one for the 64 teams, which is way, way worse odds than the chance of getting struck by lightening. Getting it right is just too random to waste your time on “bracketology.” It is a useless enterprise. But (almost) everyone does it. The widespread perception that one can actually get the entire March Madness brackets right is based on a misunderstanding of statistics, probabilities, and (yes) reason. But then we all misperceive probabilities, even those who know better. Regardless, all manner of sportscasters, celebrities and just plain folks occupy their time dutifully filling out their brackets.

So, I have to ask, is this useless enterprise more important than, say, defending seniors, kids and  more against Paul Ryan (don’t look now but an even worse version of his budget just passed the House today)? And do not citizens everywhere make better use of their time writing to the President and telling him to not throw us all (seniors, kids, workers, the sick, the poor, and more) under the bus or on “the table”? Wouldn’t it be a better use of time to call Nancy Pelosi and tell her to stop caving before the negotiations even take place?  The odds would be vastly better than 9 quintillion to one if every single citizen who cares got on the phone and on the email system of Congress. You can even do it while you watch!!!!!! Why, if every Democrat told their representatives her or she will  withhold support if they don’t stop the caving to the 1%, imagine how things might change!

Finally, please, Terry McAulliffe, so many Virginians are depending on you to articulate a strong message against every one of Cuccinelli’s onerous ideas, but more important, to articulate a comprehensive and comprehensible set of proposals for a constructive alternative. We need you to win! So, no brackets please. Defend the people against Paul Ryan and John Boehner. Virginia and the nation are depending upon it. As for everyone else, pick up the phone. Write your emails.  Don’t let the GOP get away with hiding ruthless plans behind the distraction of useless “bracketology.”