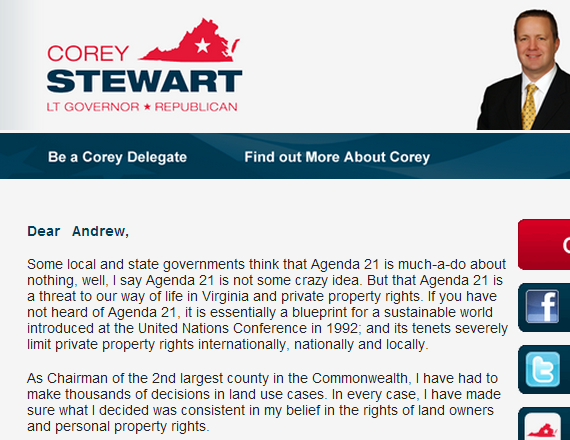 So far as I can tell, and I’ve checked into it some and am pretty well satisfied I know, Agenda 21 is a crazy conspiracy idea that’s been making the rounds on the right among the Tea Partiers and others on what used to be a fringe but is now main stream in the Republican Party.

This Agenda 21 conspiracy theory shows big delusions, it seems to me, about the nature of the threats in the world that should and shouldn’t concern us. Americans losing their property rights to the United Nations is NOT a problem worth a nano-second’s concern. Private Property rights of Americans are if anything treated as so inviolable that we have a hard time coming to any reasonable balance between those rights and the need for society to protect itself against some of the profitable but destructive things people can do with their property.

If anything, we’re having trouble making the necessary adjustments in an ideology –the market ideology, put forward by Adam Smith in 1776– articulated when the magnitude of the impact of human economic activity on the planet was but a fraction of what it is now.

But a lot of people on the right have gotten themselves whipped up over an absurd belief that the threat to property rights is clear and present.  They’re worried about a threat to property being hatched by communists and U.N. world order people– a threat that’s just a figment of their paranoid-style imagination. A delusion that just happens to fortify the interests of predatory capitalism that’s out for everything and has no conscience or sense of social responsibility.

(More than 45 years ago, I did a study as an undergraduate at Harvard on the kinds of radical right craziness that regarded rock and roll, for example, as part of a communist conspiracy.  Billy Ray Hargis as a radical right preacher, way off on the fringe.)

Fringe no longer.  Here’s a major Republican candidate for lieutenant governor, Corey Stewart, talking (in a campaign email – see above for a screen shot) about Agenda 21 in ways that will feed the crazy, the deluded, the manipulable. Don’t know whether he believes this stuff or not. Either way, it’s scary.

“As Chairman of the 2nd largest county in the Commonwealth, I have had to make thousands of decisions in land use cases. In every case, I have made sure what I decided was consistent in my belief in the rights of land owners and personal property rights.”

Here’s a guy who’s putting it front and center that he’s focused on reassuring people about something that has absolutely no basis in political reality, a diversion that helps the people who are REALLY stealing our liberties keep making their mischief unnoticed by their supporters on the right.