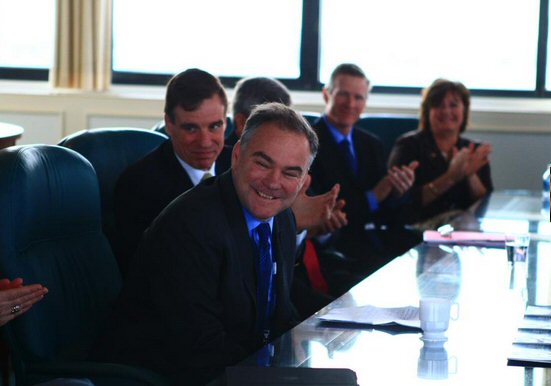 The 68-31 Senate vote this morning was on cloture (“on the Motion to Proceed”), so that the Senate can proceed to debate the Toomey-Manchin gun buyers’ background checks bill (“A bill to ensure that all individuals who should be prohibited from buying a firearm are listed in the national instant criminal background check system and require a background check for every firearm sale, and for other purposes.”), and other gun-violence-related amendments. Both Senators from Virginia – Tim Kaine and Mark Warner – voted “aye,” and I thank them for doing so. Not that this took enormous courage, given that 90%+ of Americans support universal background checks for prospective gun buyers, but still, I’m glad to see Senator Warner in particular, despite his nauseating NRA “A” rating, voting the right way on this bipartisan compromise legislation. (note: Tim Kaine’s been generally strong on gun violence issues since he was Mayor of Richmond)

Now, the question is will this bill ever become law? I’m not holding my breath, given the remaining tortuous path through the Senate, then the Teapublican-controlled House, then possibly a conference committee. Just thinking about this daunting obstacle course makes me wonder how we ever get anything at all done in Washington. But the bottom line is this: if Congress can’t pass commonsense, bipartisan legislation that 90%+ of Americans support, just a few months after the Newtown tragedy, then they (well, at least the Republican members, plus a couple of pitiful “Democrats” like Mark Begich and Mark Pryor, both of whom voted “nay” on this bill) should just fold up their tents and go home, because they’re utterly worthless. We’ll see what happens…