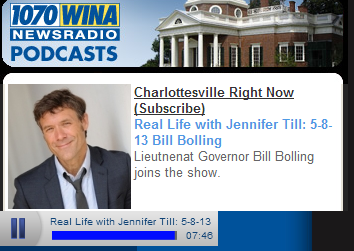 This afternoon, on the Coy Barefoot Show, Bill Bolling talked about not going to the Republican Party of Virginia convention, and once again criticized “these closed conventions” as “effectively disenfranchis[ing] hundreds of thousands of Virginia Republicans from participating in the process of nominating candidates.” In addition, Bolling made it clear yet again that he’s “unable to lend my public support to the presumptive Republican nominee for governor.”

Bolling also criticized Ken Cuccinelli’s – as well as Terry McAuliffe’s – tax cut proposals. According to Bolling, it’s “always good politics” to promise tax cuts, but in Cuccinelli’s case, his proposal would “blow about a $1.4 billion hole in the state budget by cutting the state income tax and corporate income tax.” Bolling continued, “nobody ever talks about how they’re going to make that money up…what are you going to do to keep localities whole, or to keep the state whole, are you just going to expect people to further cut funding for education and transportation and health care?” Good question!

On the Star Scientific and Governor’s mansion “chef” scandals, Bolling called it a “mess.” He asked why Cuccinelli didn’t report the gifts he received, and wondered whether Virginians would accept his “answer” that he “just forgot.” Secondly, Bolling says the “bigger question is whether or not [Cuccinelli’s] office had a conflict of interest in becoming involved in the tax dispute between Star Scientific and the Commonwealth, given the fact the AG owns stock in the company and was receiving these types of personal gifts from the president of the company.”  In the end, this has “served up an issue for the Democrats to use against Mr. Cuccinelli in the campaign that they would otherwise have not had.” Yes, it most certainly has!

Meanwhile, speaking of Ken Cuccinelli, if you can stand listening to him (which I can barely do), click here for Coy Barefoot’s interview with him this afternoon. Among other things, Cuccinelli said Bill Bolling’s decision not to attend the Republican convention wasn’t “noteworthy.” Uh huh. Cooch also went out of his way to praise Bolling’s efforts on “job creation,” obviously trying to court Bolling, now that he needs him. Gotta love politics, huh?

In other news, Coy Barefoot asked Cuccinelli why he thought he had jurisdiction in the Governor’s Mansion chef/embezzlement case, and why it wasn’t the Commonwealth’s Attorney in Richmond’s responsibility? Cuccinelli said it was a good question, but never really answered it, just talked around it.

Cuccinelli once again said he didn’t report the Johnnie Williams’ gifts because, well, “I forgot.” Uh huh, riiiight. Barefoot then asked Cuccinelli if the Governor’s Mansion chef could use the same defense – maybe he just “forgot” to tell anybody about a couple of cold cut platters, since it’s common to take leftovers home. Cuccinelli tried to say it was totally different, because the chef was essentially taking state money, and that what Cuccinelli did was simply not report a private gift. Yep, that’s our “straight arrow” Attorney General. Heh.