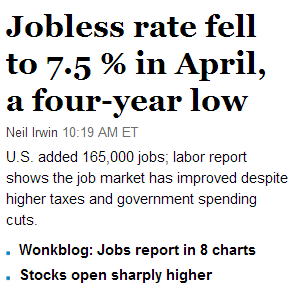 The White House statement is on the “flip.” The bottom line: “While more work remains to be done, today’s employment report provides further evidence that the U.S. economy is continuing to recover from the worst downturn since the Great Depression…The household survey showed that the unemployment rate edged down from 7.6 percent in March to 7.5 percent in April, the lowest rate since December 2008.” Not too bad for that wild-eyed “socialist” in the White House, eh? 🙂 I’d also point out that the stock market is now at record highs. Can you imagine how the economy and the stock market would have been with John McCain and Sarah Palin (or Romney/Ryan, god forbid) in the White House? Shudddder.

By the way, given that the White House is apparently too polite to point it out, the economic progress we’ve made since George W. Bush (aka, “worst president since Hoover”) left office has been an overwhelmingly Democratic effort. To the extent Republicans have had anything to do with it since 2009, it’s been to vote against crucial economic recovery measures, to hold the economy hostage (and seriously jeopardize our country’s credit ratings) to their insane demands on what’s supposed to be (and has been for decades) a routine increase in the debt ceiling, played a huge role in imposing the FUBAR sequester on our country, blocking needed investments in our country’s infrastructure (and, hence, our economic future), slashing the public work force (e.g., teachers, cops, firefighters) at the state levels, and generally pushing for austerity programs when the exact opposite is needed.

Yet despite all the Republican efforts to deny President Obama a second term (yet another Republican #FAIL), the economy continues to recover, thanks to Democratic policies. And, again, no thanks to Republicans, who should all be “rewarded” for their disgraceful behavior by being show to the exits in November 2014.

P.S. Thanks largely to Republicans, since January 2009, “we’ve lost three-quarters of a million public sector jobs” as “austerity is dragging down the economy as a whole.”

Statement on the Employment Situation in April

WASHINGTON, DC – Alan B. Krueger, Chairman of the Council of Economic Advisers, issued the following statement today on the employment situation in April…

While more work remains to be done, today’s employment report provides further evidence that the U.S. economy is continuing to recover from the worst downturn since the Great Depression. It is critical that we remain focused on pursuing policies to speed job creation and expand the middle class, as we continue to dig our way out of the deep hole that was caused by the severe recession that began in December 2007.

Today’s report from the Bureau of Labor Statistics (BLS) shows that private sector businesses added 176,000 jobs last month. Total non-farm payroll employment rose by 165,000 jobs in April. The February and March employment estimates were revised up by a total of 114,000 jobs. The economy has now added private sector jobs every month for 38 straight months, and a total of 6.8 million jobs has been added over that period.  Over 800,000 private sector jobs have been added over the last four months.

The household survey showed that the unemployment rate edged down from 7.6 percent in March to 7.5 percent in April, the lowest rate since December 2008. The labor force participation rate was unchanged at 63.3 percent in April.

Now is not the time for Washington to impose self-inflicted wounds on the economy.  The Administration continues to urge Congress to replace the sequester with balanced deficit reduction, while working to put in place measures to create middle-class jobs, such as by rebuilding our roads and bridges and promoting American manufacturing.  The President will continue to press Congress to act on the measures he called for in his State of the Union address to make America a magnet for good jobs, help workers earn the skills they need to do those jobs, and make sure their hard work leads to a decent living.

According to the establishment survey, in April employment rose notably in professional and business services (+73,000), bars and restaurants (+37,900), retail trade (+29,300), and health care and social assistance (+26,100).  Construction declined by 6,000 (due to a fall in nonresidential construction employment), after growing for 10 consecutive months and adding 181,000 jobs in that period.

As the Administration stresses every month, the monthly employment and unemployment figures can be volatile, and payroll employment estimates can be subject to substantial revision. Therefore, it is important not to read too much into any one monthly report and it is informative to consider each report in the context of other data that are becoming available.

Alan B. Krueger is Chairman of the Council of Economic Advisers