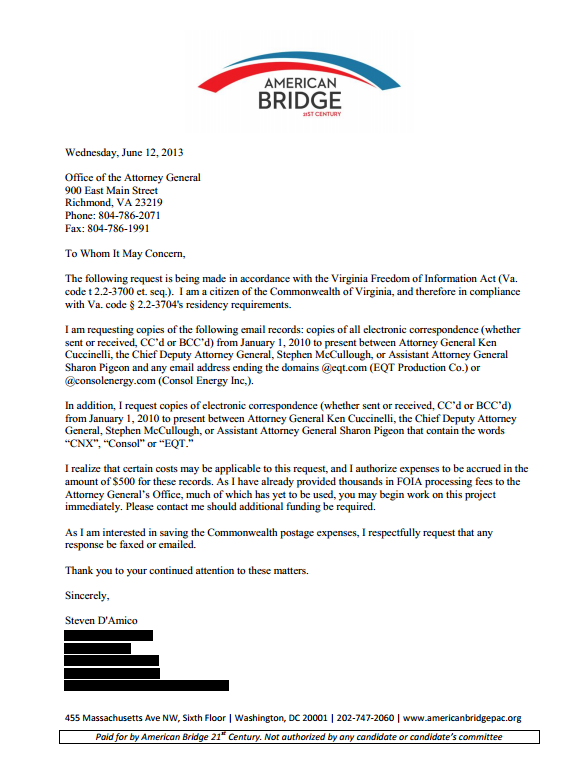 Click on the image to “embiggen,” Also see the quote from Chris Harris, Communications Director/Senior Advisor at American Bridge 21st Century, who says:

With the help of Ken Cuccinelli’s office, two out-of-state companies are fighting Virginians in court so they don’t have to pay royalties to landowners for gas taken from their land. With the Attorney General siding with corporate campaign donors over taxpayers, Virginians deserve to see the specific advice given to the parties fighting against thousands of Virginians and the amount of oversight Cuccinelli and his deputies provided.

Yes, we most certainly do. But don’t wait for Corruptinelli to do so anytime soone. Meanwhile, for more on this growing slimepit of corruption by Ken Cuccinelli, click here. As for the “sugar plum apologists” who would excuse anything and everything Cuccinelli does…here’s DJ Rippert of Bacon’s Rebellion, who came up with that creative, and all-too-accurate, phrase.

No doubt the usual Richmond apologists will say that no scandal has been committed since no scandal has been chiseled into stone regarding this matter. Therefore, the fact that a federal judge is railing against the state’s sitting Attorney General for his office’s advocacy of a company which donates heavily to his campaign is irrelevant. That explanation may work for the Richmond elite. However, those of us Virginians living outside the friendly confines of Richmond see something else – a systematically corrupt state government which trades in an almost endless array of gifts, unlimited campaign contributions and crony capitalism.