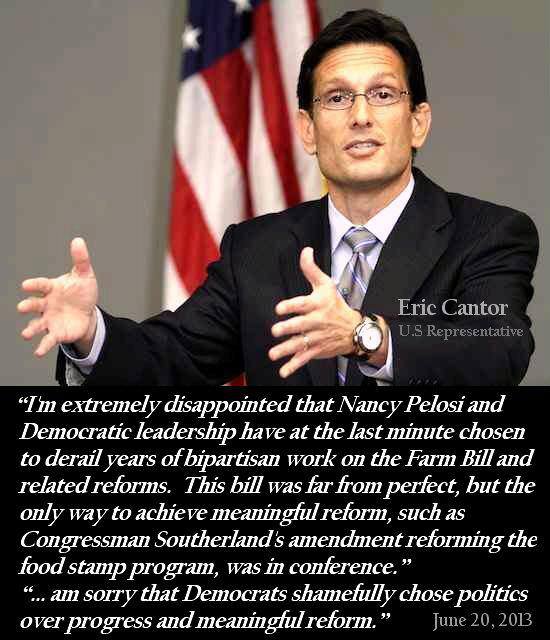 Blaming the Democrats for the utter failure of hiw own caucus, as well as his own “leadership?”  Is Eric Can’tor the stupidest member of Congress, or just the whiniest? Here’s Can’tor’s pathetic explanation for why the Teahadist-controlled House of Representatives utterly #FAIL’ed this afternoon to pass the farm bill.

I’m extremely disappointed that Nancy Pelosi and Democratic leadership have at the last minute chosen to derail years of bipartisan work on the Farm Bill and related reforms. This bill was far from perfect, but the only way to achieve meaningful reform, such as Congressman Southerland’s amendment reforming the food stamp program, was in conference.

I strongly supported the Southerland amendment which built on successful welfare reforms that have worked in the past to give states more flexibility and encourage self-sufficiency by increasing workforce participation among those enrolled in the SNAP program. I commend Chairman Frank Lucas and the House Agriculture Committee for their efforts, and am sorry that Democrats shamefully chose politics over progress and meaningful reform.

My god. Seriously? Is this guy brain dead, or is he just the biggest loser in Congressional history?!?

P.S. “The Fix” writes: “Republican insiders immediately tried to foist the blame on Democrats…But here’s the simple political reality: The majority party in the House should never – repeat NEVER – lose floor votes on major (or, really, minor) pieces of legislation. Republicans, literally, write the rules governing the debate – and, as the majority, must ensure that even in the worst-case scenario they can get the ‘yeas’ they need from their own side. That didn’t happen…”