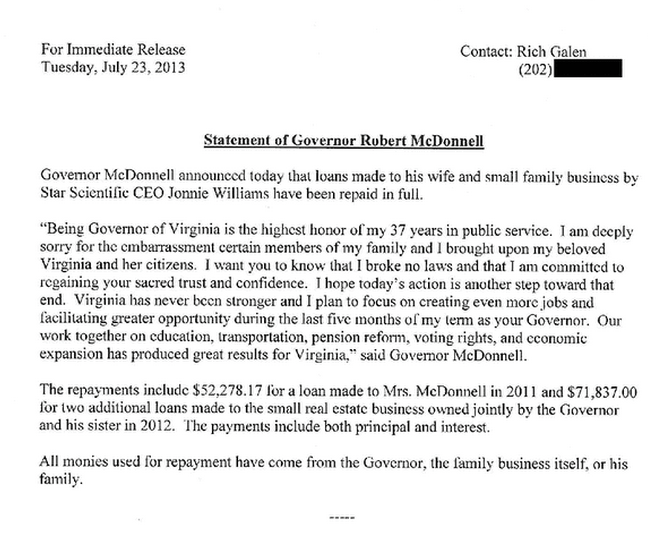 Will wonders never cease? After months of revelations in the media about gifts/loans/etc. from Jonnie Williams to Gov. Bob McDonnell and his family, as well as other improprieties, McDonnell has finally fessed up AND paid up – at least in part (click on statement to “embiggen” and note that he’s only repaid LOANS, not GIFTS like the infamous Rolex or the Bergdorf Goodman shopping spree or the $15,000 wedding gift, etc. Also, WHO paid off those loans for him? I strongly doubt he had the money to do so. Lots of questions.). Of course, none of these actions would ever have been necessary if McDonnell hadn’t behaved in such a wildly unethical way in the first place (for the first 3+ years of his governorship, basically until he was caught).

Meanwhile, Ken Cuccinelli has a LOT of questions of his own still to answer, for which he’s provided essentially nothing but lame excuses like “I forgot” or “I was ‘walled off’ by my staff” or whatever. The fact is, Cuccinelli was buddies with the same slimeball, Jonnie Williams, as Bob McDonnell was. In addition, as Terry McAuliffe pointed out in the debate Saturday – and as Lt. Gov. Bill Bolling paraphrased it yesterday – Cuccinelli “had a fiduciary duty to the people of Virginia to prosecute the tax claim against Star Scientific,” yet “at a time when [Cuccinelli] should have been taking them to court, they were taking [Cuccinelli] to New York City on their private jet.” How about some answers on that front?

Finally, this entire incident – far from over, I’d point out, as legal proceedings and investigations continue – has demonstrated the utter inadequacy of Virginia’s current laws governing the ethical behavior of politicians, and the lobbyists who love (to bribe) them. That desperately needs to change…but will it? Only if Virginians make it clear that they DEMAND such changes and won’t take “no” for an answer. The call for ethics reform should not be a partisan issue, by the way, but something that all of us who care about good, honest government can agree on. Seems pretty basic, I’d say, for any of us who believe in the American system of government…

UPDATE: See the statement from Progress Virginia, which asserts (correctly) that “If Bob McDonnell Can Pay Back Jonnie Williams, Ken Cuccinelli Should, Too” – on the “flip.”

UPDATE #2: As Josh Israel of ThinkProgress points out, “McDonnell had long insisted his actions were entirely on the up-and-up, saying in April, ‘No one, during my administration, has been giving any special consideration because of their friendships, because of their donations to my campaigns, because of any gifts they’ve been giving – not Mr. Williams or his company or any other individual or any other company.'” In addition, McDonnell “long criticized media reports on his relationship with Williams as inaccurate.” Looks like they were VERY accurate, as it turns out. Apology forthcoming? Hmmmm.

UPDATE #3: I’m sure this was a coincidence (yeah right), but McDonnell’s non-apology “apology” came shortly after this (“A government watchdog group called on the Internal Revenue Service Tuesday to investigate whether Gov. Robert F. McDonnell, first lady Maureen McDonnell and Attorney General Ken Cuccinelli II had failed to report and pay taxes on gifts received from Star Scientific and its chief executive.”).

If Bob McDonnell Can Pay Back Jonnie Williams, Ken Cuccinelli Should, Too.

Returning gifts is a clear sign Cuccinelli is indebted to Virginia families, not well-heeled donors

Richmond, VA – On the heel of Governor Bob McDonnell’s announcement that he has repaid over $120,000 in loans from Star Scientific CEO Jonnie Williams, ProgressVA called on Attorney General Ken Cuccinelli to fully divest himself of Williams largess and repay Star Scientific and Williams for the value of gifts received. Cuccinelli has accepted over $18,000 in gifts from Williams and his company, including vacations and private plane flights. Cuccinelli’s entanglement with Williams has forced his recusal from two legal cases so far, impeding his ability to serve Virginia families as Attorney General.”

“Governor McDonnell’s announcement is clearly an implicit acknowledgment that accepting tens of thousands of dollars from Star Scientific CEO Jonnie Williams is ethically questionable,” said ProgressVA executive Director Anna Scholl. “Cuccinelli’s acceptance of over $18,000 in gifts from Star Scientific and Williams is a clear betrayal of the public trust, which was exacerbated by his failure to disclose these gifts and his multiple stock purchases in Star Scientific in a timely manner. If Ken Cuccinelli wishes to demonstrate that he truly is working for Virginia families and not well-heeled donors, he should immediately refund the value of these gifts to Williams and cut all ties.”