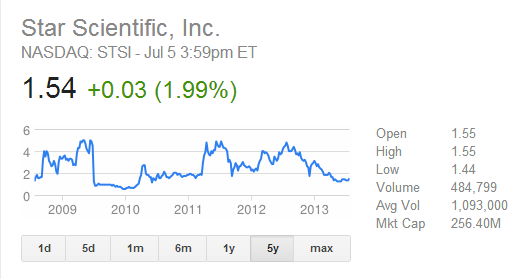 When Bob McDonnell came into office, Star Scientific stock was at its low point for his entire term. In the past 12 months alone, it has traded in a range between $1.15 a share to nearly $5 a share. This is a stock  prone to wide swings in price on a percentage basis, and it is also a stock clearly subject to manipulation; just read up on it. The federales know this. It has no earnings. It exists on hype, as well as on stock recommendations from less than the best sources. Star Scientific knows how to pump and dump this stock.

Could insider trading be a subject of the federal probe swirling around Governor McDonnell and his pal Jonnie Williams, the head guy at Star Scientific? If you look at the stock chart, you have to think: It sure could be. This is one way a guy like Williams ropes you into his web: it gets  you some “easy money,” gets you to buy the stock before it is going to manipulated up. He may even loan you the money, even buy it for you, sets up an account for you. It is so easy to suck folks like the McDonnells given what we now know about their view of entitlement.

There is no reason for this stock to have ever traded near $5 during McDonnell’s term. Looking at the chart, it has gone from the $1.50 range to nearly $5 a share up and down…TWICE in the last two years. It was manipulated up by the use of the press and recommendations and planned buying.

Back in 2011, the stock price rose VERY FAST in a short period of time. If I remember correctly, it was due to rumors about this new line of “health” stuff they claimed to have, I think it had something to do with curing Alzheimer’s or something like that. Totally bogus. Of course, this has happened before with this stock, when it tried to get money out of the tobacco companies on a worthless claim of patient infringement (or something like that in a trial in New Jersey federal court if I remember correctly).

Bottom line: Is all the federal interest in the McDonnell/Williams connection actually not related to alleged “gifts” at all, but is there a stock trading angle? All I know for sure is this: If you look at the stock chart, and you know the history of this stock, then the first step rise of 300% in a short period of time early in the McDonnell term is a totally manipulated one. It had nothing to do with the real facts about the company and its products.

If Mr. Williams gave someone a wink or a nod – and further if he loaned money to someone to buy stock, or in any way helped someone profit from his inside knowledge – then you are going to have a lot of federal interest if the federales think this might have been the case.

I am not making any claims or charges or whatever. But when you look at the stock chart, overlap it with the relationship/alleged gifts and help give Star by the First Family, it would raise flags to any federal or state investigator.

Clearly, the positive press given Star by its association with the Governor and First Family in 2011 and 2012 – efforts which boosted Star’s credibility as Mr. Williams intended – helped increase the stock price. This can not be denied. Any investigator will see that at the beginning. My prediction: There is a stock scam somewhere here.

I know getting this area has the potential of opening up a lot of stuff on both sides, if true. I am not naive. But if you take one look at the stock chart of Star during the McDonnell term, there is no way an honest writer can avoid the following: the alleged gifts, the special help given by the McDonnell to boost Star’s credibility on their “health” stuff, it is simply too coincidental to be a coincidence anymore relative to the stock price. Williams knew what he was doing.