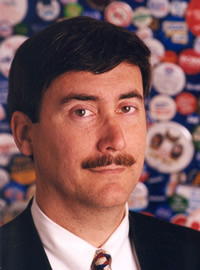 While AG Cuccinelli was suing UVA over climate change, he apparently missed the big story: a UVA professor was using state money to bolster his theories of reincarnation. That’s right – this professor claims to be the reincarnation of none other than Cato The Elder. Never met Cato? No, not the house guest at OJ Simpson’s place famously testifying at his murder trial. I mean Cato The Elder, famed Censor of the Roman Empire. The title fit the post: The Censor issued edicts on what a good citizen could, or could not, say in public, especially about public officials. Cato The Elder didn’t take no Lip, Sass, or whatever: Of course, there were no blogs back then.

But there are blogs today. And apparently, Cato The Elder, aka UVA Professor Larry Sabato, felt the need to smack down Bearing Drift, the blog site claiming to be the one true north voice of conservative thought in the Commonwealth. I recently debated one of the honchos at the site on the subject of E.W. Jackson, the GOP nominee for LG. Shaun put up a spirited defense of Mr. Jackson, from A to Z. Needless to say, I had trouble not laughing on air: indeed, I actually did laugh on air.

So you ask: “Okay PG, what the heck got Professor Sabato’s panties all rolled into a tight bunch?” My answer: First, he is Cato the Elder, not Professor. Second, Cato’s wrath was aimed at what Virginia’s Censor called the blog’s “irresponsible” post – a post so immoral to Cato that he “sought and received official permission” to OUT the blog as publishing pure, unsupported rumor!

So you ask: “Okay PG, what exactly did Bearing Drift post last night that would get Cato The Elder to issue an authorized, public smack down?” Let me get to the bottom line of the story. Last night, Bearing Drift published a post by one of its posters claiming “Bob McDonnell to resign as a part of plea agreement.” The poster is Willie Deutsch. According to Bearing Drift, Mr. Deutsch is a “Christian, Conservative and Republican.” Deutsh is also “Editor-in-Chief for NetRightDaily.com.”

Let me ask: I thought we were all Americans first, got to put being a Virginian in there too, I mean he lists three things, two of them are related to his politics, the other to his religion. Jesus didn’t define himself by being a Jewish Rabbi first, nor would he today.

But back to Larry Sabato and his Cato Coming Out Party. This post by Mr. Deutsch flipped Professor Sabato’s reincarnation switch big time. Virginia’s Cato issued an official censure of the website. Call me old-fashioned: But I don’t like the idea that anyone can officially censure someone in the use of his or her first amendment rights. Isn’t that one reason we had the American Revolution, isn’t that a big reason TJ, founder of UVA, founded UVA?

Now, I concede: Dr. Sabato does see himself as Virginia’s Censor, and the state gives his Center a lot of money or at least they did when Senator Chichester controlled the Senate budget committee. Professor Sabato is a very insightful guy, one of the best educators in the Commonwealth, and the state is fortunate he stayed at UVA, that he spends so much time teaching frosh and working with high school seniors to promote their interest in being informed citizens. To the extent the state pays him to do all that, Virginia doesn’t pay him nearly enough.

But this idea of Sabato The Elder, aka Cato The Elder, is troubling or at least it should be to you. With all due respect, I ask again: Who gave him this “official permission” to attack Bearing Drift for publishing irresponsible rumors?

I concede calling Mr. Deutsch a journalist would make John Peter Zenger turn over in his grave. With all due respect, Bearing Drift has made some rather incredible claims in its role as publisher of the conservative gospel. But do they deserve to be “officially” censored? Should that kind of attitude even exist in our political and public discourse?

200-proof answer: NO. In America, we don’t have “official” censors issuing censures to Americans exercising their first amendment rights to be idiots, or geniuses, or somewhere in between.

I don’t know whether Bearing Drift has made a complete fool of itself, indeed whether it even has a reputation that could be damaged. Still, it doesn’t need Dr. Sabato’s permission, much less Seal of Approval, to post fact or fiction, truth or dare, rumor or reality. This isn’t Rome, its not the Colonial Era, we are well into the Age of Enlightenment.

Will the Governor resign, will he get indicted, will he be cleared of all charges and rumors and innuendos? I don’t know, neither does anyone else at this point. What we do know for a fact is this: The W—–T—– nature of his actions, and those of his wife, in using the office of Governor for personal profit in the form of personal compensation thinly disguised as “gifts”, and the self-evident expectations of future monetary rewards from Mr. Williams should their efforts help his new business venture has NOT BEEN DEFENDED by any single GOP office-holder, any single GOP leaning newspaper, any single independent leaning newspaper, indeed BY NOT A SOUL.

No former Governor, no advisor to any former Governor, has DEFENDED what the First Family has been doing with the public trust given to them by the people of this state. And whatever defense the Governor claimed originally has been totally shot by his refusal to give back the Rolex.

Let’s cut to the chase. If Mr. Sabato is proof of reincarnation, then Governor McDonnell is proof positive of climate change at the Governor’s Mansion. No previous Governor or First Lady has  ever used their position for personal gain as have the McD’s. Never, ever.

As I have said several times, this is not an issue that should be decided by Plea Bargains, Resignation, and edicts from Censors past nor  present. Moreover, Senator Petersen is wrong: We need tougher gift rules, indeed we need laws BARRING GIFTS PERIOD!  As Laurie Morgan sang; What is there about NO that you don’t understand?

No gifts, no Censors, no official edicts as to whose posts are acceptable and whose are not. The people of Virginia are plenty smart. If Mr. Deutsch and his blog believe their facts, then should be encouraged to print it without fear of censuring directly or indirectly by some officialdom, real or imagined.

Dr. Sabato worries about irresponsible blogs. I would rather hear his opinion on our irresponsible Governor. Why isn’t the faculty of UVA censuring McDonnell, not just Ms. Dragas?

The reason Dr. Sabato has lifetime tenure is because of academic fears of being censured out of a job for voicing opinions not held by those in political power. So instead of going after Bearing Drift, Dr. Sabato and his colleagues might show the courage to speak out against how the Governor is permanently staining the Office of Governor.

Cato The Elder, ironically, would have done just that.

Video: Rep. Abigail Spanberger (D-VA07) Says President Biden’s Unity Message Was NOT Intended For Those Who Would Rise Up in Insurrection (Spanberger: "we should be unified in our aggressive denouncement of white nationalism, far-right extremism") https://bluevirginia.us/2021/01/video-rep-abigail-spanberger-d-va07-says-president-bidens-unity-message-was-not-intended-for-those-who-would-rise-up-in-insurrection