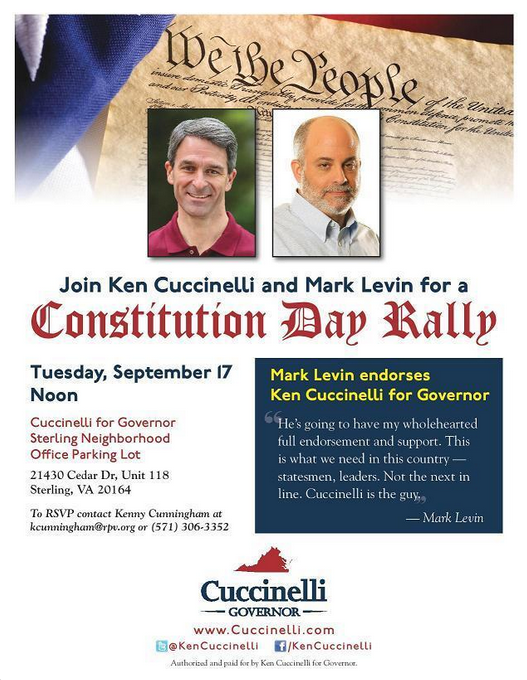 As if the photo of Ken Cuccinelli and Rand “Aqua Buddha” Paul weren’t enough, how about this flyer of a rally “the Cooch” is planning on holding with Mark Levin on Tuesday in Sterling? But wait, who is Mark Levin you ask? Here are a few quotes and citations to give you a flavor of this far-far-far-right-wing radio host’s “thinking.”

*Says Syria is all about distracting from Obamacare fight: “Just like the Trayvon Martin and George Zimmerman case…now [the Syria situation]…I’m not a conspiratorial person…but I do see a pattern here, a pattern of distraction. Obama goes off to golf, nothing affects him…We have a fight going on on Capitol Hill to defund [Obamacare], it’s getting zero attention…I don’t believe that’s a coincidence…”

*Racial profiling rocks!: “Why Would We End Racial Profiling For Law Enforcement Purposes? Are We All Supposed To Be Helen Keller?”

*Raging misogynist: “It’s not the National Organization of Liberal Women. It’s the National Organization of Ugly Women.” He also attacked Nancy Pelosi’s appearance, saying “You could bounce a dime off her cheeks” and also “One more face lift and … those eyes are going to pop right out.” And he attacked two female Supreme Court justices: “Sotomayor is ‘Ruth Bader Ginsburg plus about 50 pounds.'” Oh, he also told a female caller, “I don’t know why your husband doesn’t put a gun to his temple. Get the hell out of here.” And he called Rachel Maddow “Rachel Mad-Cow.” More? He called Hillary Clinton “Her Thighness.” Sensing a pattern here?

*Detests women in the military: “Allowing Women In Combat ‘Is Radical Egalitarianism Gone Nuts'” and “Women In Combat Pose A Danger To ‘A Real Man’ Who Will React Differently If They’re In Danger.”

*Raging homophobe: “Levin Attacks Christie For Meeting With Obama: ‘Same-Sex Politicians’ Getting Together To ‘Check Out The Jersey Shore.'”

*Defends George Zimmerman: “If Zimmerman Is Harmed, I Blame The President Of The United States”

*Defended BP during the Gulf of Mexico oil disaster: “BP hearings are a ‘Soviet-style spectacle’ and are part of a ‘huge cover-up'”

*Like EW Jackson, compares liberals to the KKK: According to Levin, “‘the Klan’s agenda’ and “the radical left’s agenda…are pretty similar.'”

*Obama=Hitler: “Levin asserted that Obama is ‘really into these big German-like events that he creates in this country, isn’t he? Have you noticed that?…Yeah, we’ve seen this. It’s scary.”

In The Liberty Amendments, Levin lays out a conservative dystopian nightmare. Among the most toxic of his ideas would be the redefinition of the Commerce Clause to wipe out nearly all the hard fought protections of the 20th century…

The results would be disastrous with nearly every legislative achievement since the New Deal wiped out. The Fair Labor Standard Act that established a minimum wage and outlawed child labor would be a thing of the past.

The Civil Rights Act of 1964, for example, prohibited private employment discrimination and service discrimination by hotels and restaurants under the Commerce Clause, a power explicitly upheld by the Supreme Court in rejecting the immediate right-wing challenges to the historic anti-discrimination law’s constitutionality.

Federal law enforcement has also relied on the expansive breadth of the Commerce Clause to ensure the FBI can fight interstate crime, as this constitutional authority is at the root of criminal laws from the Federal Kidnapping Act to the Church Arson Prevention Act…

Another amendment Levin endorsed would result in a corporate welfare gold rush. The conservative radio host proposes that the government, including state and local authorities, should be constitutionally mandated to reimburse entities if a new regulation “results in a market value reduction of the property, interference with the use of the property, or a financial loss to the property owner exceeding $10,000.”…

…Under this proposal, if your town passed a referendum preventing a multinational corporation from polluting a local water supply, it would be on the hook for the “economic damage” to the company.…

Levin’s numerous other amendments, including a reorganized tax system, the elimination of the direct election of Senators, and an enshrinement of disenfranchising voter ID laws into the Constitution are equally unworkable…

Need a long, hot shower right about now? Yeah, THAT is the stark, raving lunatic (and bigot) who Ken Kookinelli’s proudly appearing with this coming Tuesday – at a “Constitution Day Rally,” no less. Can someone please tell me how Cuccinelli can be the nominee for Governor of the Virginia Republican Party?!?