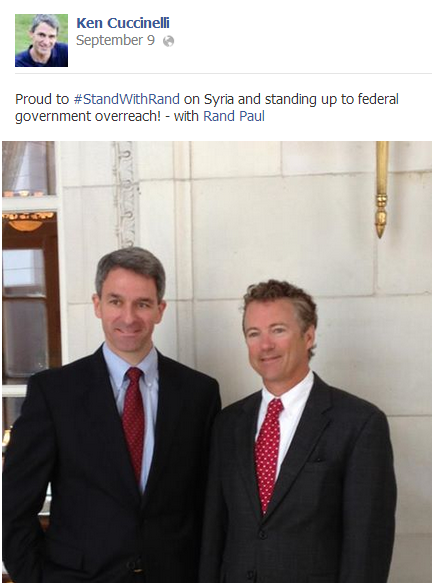 This photo, posted on Ken Cuccinelli’s Facebook page, sums up SO much that’s wrong with “the Cooch” that it’s hard to know where to begin. But just for fun, here are a few that leap out at me.

1. The Governor of Virginia has ZERO – nada, nil – ability to even mildly influence foreign policy. Yet Ken Cuccinelli, trailing by 6-7 points in the polls in his race for GOVERNOR, has repeatedly commented on foreign policy (Syria, specifically), in recent weeks. Utterly bizarre. Doesn’t this guy have other things to focus on, like his flailing, failing campaign (which just experienced a shakeup, in part due to near-panic among Virginia Republicans that Cuccinelli is going to lose, and possibly lose badly, in 1 1/2 months.

2. The fact that Cuccinelli thinks foreign policy – Syria, specifically – might be a campaign issue in the Virginia Governor’s race indicates how he will govern: focusing on his own agenda (and not on ours!), plus fighting constantly with the federal government (one of Virginia’s biggest employers, as well as the basis of a good chunk of Virginia’s economy) regardless of whether it benefits Virginians, and even where he has ZERO influence or “say” in the matter.

3. The news this morning is that the U.S. and Russia have agreed on a plan to seize Syria’s chemical weapons, “backed by a U.N. Security Council resolution that could allow for sanctions or other consequences if Syria fails to comply.” In other words: the Syria crisis is most certainly not over yet, but right now this agreement – and the policy of negotiating from a position of strength, including the credible threat of military force – looks like a MAJOR SUCCESS for the Obama administration. Yet Ken Cuccinelli will NEVER say anything positive about Barack Obama, or any “Democrat” (he refuses to say the word properly, just to prove that he can be a puerile putz, basically) politician. With regard to Obama, the fact is that Cuccinelli suffers from a SEVERE case of Obama Derangement Syndrome. Either that, or he’s just pandering to his Teahadist base, which is driven to a frothing-at-the-mouth frenzy by a mixed-race guy named “Barack Hussein Obama” in the White House.

4. Cuccinelli’s standing next to Rand Paul in that photo. Rand Paul? Seriously? You mean the guy who gets ZERO ratings from: a) NARAL Pro-Choice America (for supporting “personhood” legislation that would ban abortion and many forms of contraception, etc.); b) the League of Conservation Voters (for being an anti-environment, climate science-denying nutjob); and c) the National Education Association (for his radical, anti-public-education agenda). Paul also gets abysmal ratings from groups like NETWORK (“A National Catholic Social Justice Lobby”), of course organized labor (that goes without saying for politicians like Rand Paul and Ken Cuccinelli), the Humane Society of the United States (for being anti-animal welfare), and the Alliance for Retired Americans (perhaps for saying Social Security is socialism and Medicare is a Ponzi scheme, etc, etc. On the other hand, Paul gets superb ratings from groups like the NRA, the “National Right to Life Committee,” anti-Latino nativist groups like NumbersUSA, the Christian Coalition of America (founded by raving madman Pat Robertson, and advocating for a theocratic America), the Family Research Council (labeled an anti-gay “hate group” by the Southern Poverty Law Center, etc, etc. How is this relevant to the Virginia Governor’s election? Because Ken Cuccinelli holds the same views as Rand Paul on all these things.

As I said, this photo sums up just about everything wrong with Ken Cuccinelli, and certainly why he’s wrong for Virginia!

P.S. I’m not aware that Rand Paul is outright corrupt, so that might be one area where Cuccinelli has him beat (although both take huge sums of cash from the Koch brothers and other fossil fuel interests, then eagerly do their bidding).

Audio: LG Sears on the Highland Park gun massacre - "They have red flag laws...When you think about murder in general, there are laws about how murder, murder, murder, murder, murder, murder and yet we have murders..." https://bluevirginia.us/2022/07/wednesday-news-worried-about-abortion-and-demonic-possession-youd-make-a-great-republican-politician-republicans-have-a-choice-they-can-dump-the-kooks-vp-harris-calls-for-assaul#comment-5908769738

Far-right/insurrectionist VA Sen. Amanda Chase (R) continues to promote a 100% debunked, "Big Lie" film, this time along with someone who advocates "ending all shots for Covid-19 throughout...Virginia." Is it possible to get any crazier than this? https://bluevirginia.us/2022/07/wednesday-news-worried-about-abortion-and-demonic-possession-youd-make-a-great-republican-politician-republicans-have-a-choice-they-can-dump-the-kooks-vp-harris-calls-for-assaul#comment-5908753625