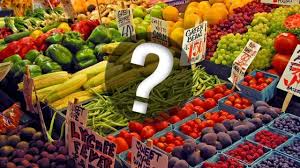 Just got this in an email from Truthout, under the heading “Monsanto Spends Millions to Defeat Washington GMO Labeling Initiative”:

Washington state will vote on a ballot initiative to label GMO food this fall. Monsanto, banking on repeating its California victory, has given $4.6 million to the campaign to defeat it. But while fundraising is 3-to-1 against it, the “Yes” campaign is confident savvy voters will stay strong in their 66 percent support during an an inevitable onslaught of advertising.

The whole premise of capitalism is that buyers have the information of interest to them pertinent to their decisions in the marketplace. It is nobody’s business but their own, according to the market ideology of liberty, what criteria they wish to apply to their decisions. They have a right to know what they are buying.

Some people want to know if the food they are buying includes genetically modified organisms (GMOs). According to the capitalist worldview, that should unquestionably be their right to know.

It’s understandable that Monsanto would not want people to avoid products that utilize their GMO technology. So it’s no mystery why they’d not want labeling to be required. But it’s nonetheless unmitigated chuptzpah, not to mention capitalist hypocrisy, for them to seek to prevent buyers from knowing what they’re getting.