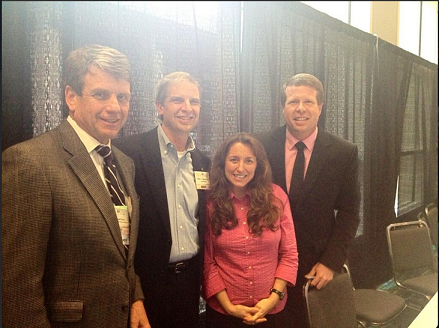 “The Obenshain-Jackson-Cuccinelli ticket continues attract extreme Tea Party support. It’s not surprising based upon the Obenshain-Cuccinelli record of trying to ban common forms of birth control and outlaw abortion even in the cases of rape and incest. The latest surrogate to come to Virginia to stump for the ticket is Jim Bob Duggar, who last week compared the United States to Nazi Germany. Mark Obenshain should be embarrassed by these comments, but instead he chooses to accept their help and support. Obenshain should denounce Mr. Duggar’s outrageous comments and issue an immediate public apology.”

Today, members of the Duggar family were in Virginia campaigning for the extreme Tea Party ticket. Jim Bob’s son, Josh, who is the Executive Director for FRC Action, the lobbying arm of the conservative Family Research Council, tweeted “Great time here in Richmond at the #VA capitol rallying for @Cuccinelli4Gov @JacksonForLG @MarkObenshain.”

Josh Duggar has said that Cuccinelli, Jackson and Obenshain “really are exemplary of their values.” A copy of their “values” can be found here.

The Duggar family previously campaigned with Obenshain in June. Obenshain tweeted “Great to be with Mike Farris and the Duggar family on this rainy afternoon at the Home Educators Assc Convention!” A picture of them campaigning with failed Lt. Governor candidate and Patrick Henry college Chancellor Michael Farris is above.

Video: Trump’s Former Chief of Staff, Who Helped Trump Try to Subvert the 2020 Election and Stay in Power, Now “Working With” VA House GOP Leader Todd Gilbert About This November’s Elections (Meadows pledges that Trump WILL BE INVOLVED in this election.) https://bluevirginia.us/2021/07/video-trumps-former-chief-of-staff-who-helped-trump-try-to-subvert-the-2020-election-and-stay-in-power-now-working-with-va-house-gop-leader-todd-gilbert-about-this-novembers-elections

Also, shame on those Rs (e.g., Glenn Youngkin) who are "honored" to accept this insurrectionist/traitor's endorsement, and those (e.g., VA House Rs, Senate Rs) who stay silent https://bluevirginia.us/2021/07/friday-news-delta-variant-has-changed-the-war-against-covid-19-how-biden-got-the-infrastructure-deal-trump-couldnt-heres-how-the-media-can-cover-republicans-responsibly#comment-5475727671