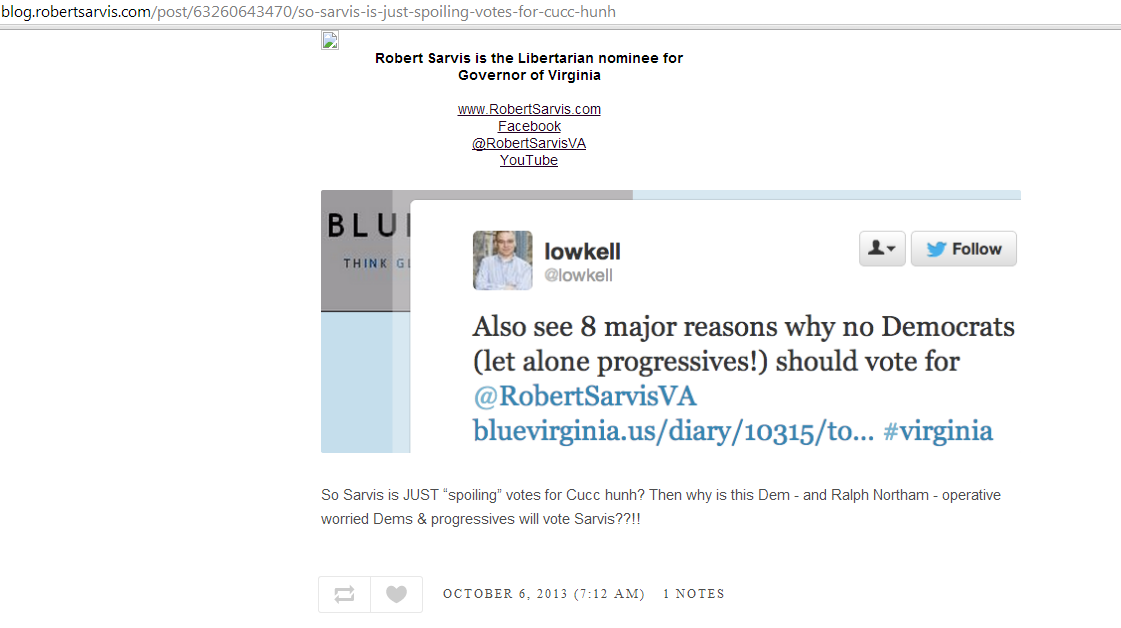 So, the other day, I got into a Twitter exchange with Robert Sarvis over his positions on the issues. Note that these positions – right wing ones from energy and the environment to guns, education, health care, the budget, you name it – Sarvis tweeted, “too bad most if them are remarkably incorrect.” WTF? The positions are his OWN WORDS from his OWN WEBSITE and from his OWN RESPONSES to Project Vote Smart! So I tweeted back, “Uh, they’re from YOUR website & from the answers YOU gave to Project Vote Smart. If they’re incorrect, that’s on you.” Sarvis’ response was for me to send him an email with my questions and he’d respond.

Well, I did, and he hasn’t. But he HAS responded – sort of – on his Facebook page and his blog (see screen shot to the right; click to “embiggen”), with yet ANOTHER falsehood. Now, I’m not saying I would have any problem being a Ralph Northam operative – I do, after all, strongly support him over the nutjob extremist E.W. Jackson – but it’s just factually wrong to say I’m an Northam operative, as I’ve never worked for him in any capacity. But more to the point, why isn’t Sarvis just answering the questions? Here they are:

1. Do you support regulation of greenhouse gas emissions? How about a mandatory Renewable Portfolio Standard?

2. Do you support ANY limits to the amount of money Virginia politicians can receive from corporations, lobbyists, etc?

4. Do you favor “returning health-care regulation to the states?” Do you oppose Medicaid expansion?

5. Do you continue to support mandatory Voter ID? Do you believe there’s really widespread “voter fraud?”

6. How would your massive tax cuts, combined with your support for private school vouchers, NOT effectively defund public education in Virginia?

Perhaps because Sarvis knows that if he DID answer these questions honestly, that no Democrat and/or progressive and/or environmentalist in their right mind would ever vote for him? Hmmmm.

P.S. Also note that Sarvis works for the Mercatus Center, which a Washington Post columnist (correctly) called a “staunchly anti-regulatory center funded largely by Koch Industries Inc.” Also, Sourcewatch points out that Mercatus, in addition to being “founded and…funded by the Koch Family Foundations…also has ties to several prominent right-wing gropus, including the American Legislative Exchange Council (ALEC).” Also of interest: “Fourteen of the 23 regulations that George W Bush put on his hitlist were, according to the Wall Street Journal, first suggested by academics working at the Mercatus Centre.” That’s who Robert Sarvis works for.