“Civil Service protection protects good employees, the bad thing about it is that is it protects bad employees. I’m going to identify with the County Attorney what I can do as far as opening up past IA’s and basically determine if there is any deputy that has committed any criminal offense or anything that rises to the level of a criminal offense, you’ve tarnished our badge, you’ve tarnished our agency, you’re not getting Civil Service protection from me.  I’ll sign Civil Service protection agreement after I’ve done an entire staff analysis to determine if there is anybody that has committed criminal acts whether on duty or off duty. There’s traffic offenses, and then there are things that happen in the community that I think we can still keep you, but theft, dishonesty, sorry I don’t promise civil service protections on that.”

In a recent article from Tom Jackman in the Washington Post, he noted that the issue of Civil Service Protections is not a very sexy issue for voters during a Sheriff’s election but for the working men and women of the agency it is probably one of the most important. In Virginia, deputies do not receive basic due process protections and it is only through a Sheriff signing an agreement they receive those protections.  Without it, deputies can be fired without cause or justification and without any recourse.  The above quote is from Republican Sheriff Candidate Bryan Wolfe when asked if he supported providing deputy sheriffs the same due process protections he had during his career as a police officer. Clearly, the answer is no.

Nearly every word in his statement screamed red flags for nearly everyone in the Sheriff’s Office who is protected under Civil Service. Mr. Wolfe has openly stated that he will not immediately sign civil service until he has done a review of every single deputy currently employed with the agency, the entire 500 plus member department.  It easy to infer that that type of under taking is going to take a great deal of time which will leave deputies open to unprotected retaliation and discipline without any due process protections.  Could you imagine living in an area where you do not have the protections of the basic due process, the fundamental bedrock our country is built upon?  It’s hard for most people, to include BA Wolfe to understand this because he has never worked in a Sheriff’s Office and cannot even begin to understand the possibility of being fired without cause, justification or due process protections because he had those during his career as a police officer.  What Mr. Wolfe wants to do as Sheriff, if elected is something he would never experience if he had a new Chief of Police come onto his department.  Why does BA Wolfe feel deputy sheriffs are inferior and should be treated any differently than their brothers and sisters who serve as police officers??  The Fairfax Deputy Sheriffs Union SEIU 512 President Kevin Pittman sent a strong worded letter to Mr. Wolfe when he made his positions public highlighting the negative impacts the Sheriff’s Office would face from the County if Civil Service is not signed immediately. Full letter posted in the comments section below

Of course, Bryan Wolfe views being the Sheriff as a “politician” and of course he is acting more like one as the campaign comes to an end.  Politicians flip-flop on positions after it becomes apparent their initial positions aren’t popular and Mr. Wolfe, who wants to be a politician, instead of the Fairfax County’s top law enforcement officer has had to change his position.  When confronted with his previous positions are he says they are being “exaggerated” and the he aggressively attacks those who raise the question. Mr. Wolfe doubled down on those positions in other candidate forums until the Hunter Mill forum when he was specifically asked if he supported Civil Service and he proudly said “Yes,”  of course with had to preface that by saying he would still have to wait until the County Attorney reviewed it, which quietly leaves an indefinite period of time where deputies will lack due process protections and be subject to unprotected discipline and retaliation. Towards the end of the debate, a follow up question was asked whether he would pledge publically not to discipline or terminate any deputies until Civil Service protections were signed and he again pledged “Yes.”  FDSU President Kevin Pittman noted that “Wolfe’s sudden reversal on Civil Service is convenient for his campaign it does however raise the very serious concern of which Bryan Wolfe will the Sheriff’s Office get if he is elected.”  Pittman also noted “if Mr. Wolfe were to fire or discipline any staff member without Civil Service due process protections, Mr. Wolfe himself would have to immediately resign from office for going back on his word during the Hunter Mill forum since he noted those who lie should not wear a badge.  It would be very telling if he would go back on a publically stated commitment.”

Unfortunately, it’s hard to know what position Mr. Wolfe really believes since he has already changed his position for his own political survival in this race.  Can Mr. Wolfe really be trusted to keep his word? If he is elected, only time will tell.  It’s also very important to note that the few deputies he feel are “bad apples” are not based on a single shred of evidence or facts.  It is based on what a few deputies have told him during the campaign, which is essentially nothing more than their own individual personal bias or preconceived notions of the alleged incidents. For Mr. Wolfe to come out and say that he is going to go through IA’s files of all deputies and be the sole judge, jury and executioner is a slap in the face to our agency, our Internal Affairs section as well as former Sheriff Stan Barry and current Sheriff Mark Sites. Fairfax Deputy Sheriff’s Union President Kevin Pittman again noted that “Mr. Wolfe’s entire campaign has centered on attacking deputy sheriffs without any evidence, facts or knowledge and bases it on the statements or rumors of others. Our Sheriff’s Office has been a model agency in Virginia and even the United States and for Mr. Wolfe to run a campaign of bashing the hard working men and women of the agency is shameful and unbecoming.”

Even though his complete 180 reversal on civil service is telling, what was more telling was his answer, or non-answer when asked a very simple question; “If you looked into your own IA files with your last place of employment would you fire yourself?” Instead of simply saying “No” he refused to answer the question and prior to answering it went into another typical tirade of his verbal berating a person in the crowd who he believed asked the question.  In fact, it was so confrontation that the moderator had to come up to stop Mr. Wolfe and remind him of the signed rules he agreed to prior to the start of the forum.  So ahead to skip to the 49:00 spot on the video to see his temper get the better of him again.

This response was over a simple question what Mr. Wolfe would do if someone were to review his IA file like he wants to do to the deputies he wants to lead. Again, it is not his tirade that should raise an alarm to people but rather the fact that refused to answer the question and just throw the card down on the podium in a tantrum.  Is the fact that he could not honestly answer the question by saying no the reason he refused to answer the question?  Is it because Mr. Wolfe believes he shouldn’t be held the same standard as the deputies he hopes to lead in the Sheriff’s Office? He had to tell the audience and the voters that he had no idea what he was ignorant of the fact that he cannot go through IA files. This did not stop him from doubling down on his desire to still go on a witch hunt of deputies through some way or another, based on rumors, vendettas of other deputies in order to make them “civilian employees.”  Again, Mr. Wolfe does not understand the rules in the Sheriff’s Office in that it can’t be done without discipline or due process, unless that is Mr. Wolfe’s subtle way of saying he is not going to sign the Civil Service agreement until he can clean house without any accountability.

While Civil Service due process protections is not the most “high profile” issue in a race for Fairfax County Sheriff when voters go to the polls on Tuesday, it is for the 500 plus men and women who work there.  It allows deputy sheriffs to work without fear of retaliation and undue discipline or punishment without legal protections. It allows them the freedoms of associations and speech many other public employees like police officers and firefighters enjoy. Deputies who work for Fairfax County have the same law enforcement powers as those who work in the City and County of Fairfax but it is up to the elected Sheriff to decide whether deputies should enjoy the same civil service protections police officers possess. Bryan Wolfe had those protections every single day during his 26 year Fairfax City career but for whatever reason he sees deputy sheriffs as inferior law enforcement officers who should not be treated as equals, at least until he decides when they should.  Many deputies do not know why Bryan Wolfe has taken such a hostile position towards giving them the same protections he had during his law enforcement career but it does explain why he has near zero support among line staff deputies within the agency or major employee unions and why the Fairfax Deputy Sheriff’s Union and organized labor are steadfastly behind Stacey Kincaid to be the next Sheriff of Fairfax County. 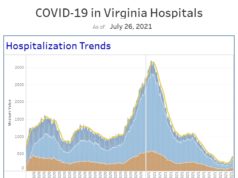 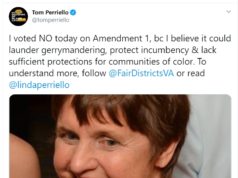 The Roanoke Times and Other Newspaper Editorial Boards Relentlessly Pushed the Fatally Flawed Redistricting Amendment. Now They’re Shocked (?) That It’s the Debacle Many...