For a transcript of Sen. Warner’s remarks, see the “flip.” For more reaction from Virginia leaders, see the comments section of this post. Thanks.

P.S. In no way, shape or form should we ever forget what Republicans just did to our country. In 20 days, it’s our first chance to let them know how we all feel about their irresponsible, destructive, disgraceful behavior, as we turn out in DROVES to vote against the extreme team of Ken Cuccinelli, EW Jackson, and Mark Obenshain.

“To paraphrase Charles Dickens, in a way ‘It may the best of times and the worst of times.’ It may be the best of times because over the last couple of days we’ve seen leaders of the Senate, Leader Reid and Leader McConnell, basically say, ‘Let’s put away some of the disputes and end this crisis.’ I want to compliment their work and the work of all the bipartisan efforts that have been going on to put this to an end. So in a certain sense perhaps it is the best of times. Yes, we’re about to finally do our job. We’re about to actually reopen the government. Put our workforce back to work. And by a whisker, we’re avoiding default and financial calamity that would ensue if we continued down that path. But it’s also the worst of times in that once again we took this conversation to the 11th hour. We have inflicted damage on our economy and our reputation. We have – and not by a Republican or Democrat skirmish, but by a small group of a ‘our-way-or-the-highway’ crowd — we have violated the first principle of governing, which says: ‘First, do no harm.’

Unfortunately, Mr. President, this self-inflicted crisis has done harm, even if we reopen the government and avoid default. The economist Mark Zandi has estimated that the cost to our economy is at least $20 billion. Reopening the government, avoiding default, isn’t going to erase that $20 billion hit to an economy that’s been struggling. I wish those who advocated for this shutdown, who advocated for this brinkmanship would be willing to come down and explain folks in my state or, for that matter, in their states, if you happen to be a government contractor, some of your workforce may have been deemed essential, you may get paid. But that portion of your workforce that was deemed nonessential chances are won’t be paid.

A company in Virginia, 5,500 people strong, 34% of their workforce has been deemed nonessential. The company has tried to pay those people through this period. Some will be paid, some will not. They will not recover. Those individuals, those families will not recover. I’d like to have somebody come down and explain what all this was for in terms of the hurt that it took in their personal finances. I’d like some of the folks who advocated these tactics to come down and explain to a restaurant owner down in Hampton, Virginia, the workforce at NASA Langley, 3,500 strong was reduced through this furlough to seven people. The lost

receipts from that restaurant over the last two weeks, how their tactics somehow improved the fortunes of that private-sector business. I’d like those who advocated that this was smart politics to shut down the government and take us to the verge of default, explain to the motel owner on Skyline Drive in Virginia who lost a couple of weekends of the peak fall foliage season and won’t see any of those dollars come back, how this was in their best interest to shut down. It’s not just in Virginia. Yosemite in California. It’s national parks in Texas.

I’d be anxious for some of those who advocated for these tactics to explain to those private-sector business owners who won’t see those dollars come back. They’re not going to get recouped. I’d like those who say and come to this floor and talk about trying to get rid of our debt and deficit and the burdens on the taxpayer, how these tactics of shutting down the government and bringing our nation to the verge of default help the American taxpayer. The American taxpayer comes out  giant loser from these tactics. The federal government, the workforce rightfully is going to be repaid, so there is no savings there. As a matter of fact, the cost of starting and stopping any enterprise is enormous. Anyone that has run any kind of business understands that. So I hope those who have advocated these tactics will come down and explain to the American taxpayer how this created a bigger deficit and explain why this made sense…

We’ve gone through two of these self-inflicted crises. The last crisis, two or three of these, close to the fiscal cliff or close to default, the last time cost us a downgrade from one of the rating agencies. We saw yesterday, Fitch, the second rating agency, put us on negative outlook. As a former governor of the state of Virginia where we kept our triple a bond rating, you don’t get back your bond rating overnight by simply saying, ‘Oops! Never mind.’ We will be paying the price for these kind of tactics for months or maybe years to come. I’d like those who advocated these tactics to come down and answer the kind of headlines we saw in “The Financial Times” and the “Wall Street Journal,” countries that may not be that friendly to us, China and Russia and others around the world, saying we need to move away from an American-centered economy around the world, a dollar-centered economy around the world, how this hit to our reputation was somehow in the best interest of our country.

So, Mr. President, I am glad that Leader Reid and Leader McConnell have worked out what appears to be a short-term solution. I’m glad for many of my colleagues on both sides of the aisle that has tried to find a common ground. It appears that we will reopen the federal government. It appears that we will avoid default and go into uncharted territory where we candidly don’t really know how bad it could have been. But, before we celebrate too much, let’s check, if reports are true, of what this avoidance of this catastrophe will mean. It means that we’ve got 90 days before the government runs out of money again. We’ve got 113 days until the debt ceiling might have to be raised again.

So my first hope would be, as we move forward, that those who practiced the tactics of shutdown and threatening default will say never again will we put the full faith and credit of the United States of America at risk. Never again will we shut down our government, hurt our federal workforce, hurt taxpayers, hurt private businesses simply because we didn’t get what we want in a political dispute. I hope as well in these coming weeks that we’ll recognize that the people who work for the United States of America and our federal workers deserve better…

The second thing, I hope we will go forward on is recognize that sequestration was set up to be so stupid that no rational group of people would ever let it happen. Well, we’ve let it happen about eight months so far and as challenging as it’s been over the last eight months, in this next fiscal year, which started actually on October 1, it is going to get exponentially worse. I understand the concerns of my colleagues on the other side, and my concern as well, that we’ve got to find a way to cut back some of our spending. But there are smarter ways to do it than sequestration. In this ensuing period, I hope we’re able to work through that. And I do believe we need to take these next 90 days or even a shorter period if we need to report back from a budget committee by mid-December, and recognize that this constant every three-month, six-month manufactured budget crisis does our country no good, and that both sides will enter into this next phase of negotiations with a little more sobriety, a little less willingness to call out each other by name, and actually recognize that we do have to get our balance sheet in order.

So, Mr. President, it is the best of times and the worst of times. I hope we will celebrate the fact that we have done our job and avoided this calamity, but let’s make sure that we never do this again. Let’s make sure that we take this next 90 days before the next C-R expires and the 113 days before the debt ceiling comes and really get our fiscal house in order and make sure we give the American back the confidence they need to move forward. With that, Mr. President, I yield the floor and note the absence of a quorum.” 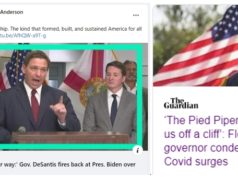 FL Gov. Ron DeSantis Called “The Pied Piper leading us off a cliff” as COVID-19 Surges Out of Control; VA GOP Chair Calls This... 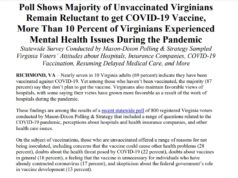