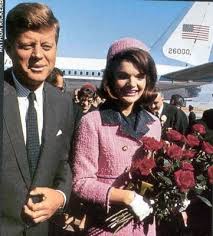 November 22, 1963 was bound to be an important day for me. On that day, as a college freshman, I was to travel down to New Haven, Connecticut, for Harvard-Yale weekend. Ordinarily, I wouldn’t have gone to an away game, but I was the quarterback of an undefeated intramural touch football team that was scheduled to play Yale’s undefeated intramural champions.

When we got to the playing field at Yale, people were strangely clumped around cars with their radios on, and the doors open. We asked what was going on, and we were told, “The president has been shot in Dallas.” It was of course unbelievable.

I had felt especially connected with JFK, having seen him only a few weeks before, when he unexpectedly showed up at the Columbia game. Sitting there in the stadium, surrounded by his Secret Service retinue, even at a distance the beauty of the man was visible, his auburn hair radiating life in the sun. How could someone look so extraordinary even across a whole football field?

And now he’d been shot.

Was he OK, we wanted to know? Would he live? Nobody knew. Only that he’d been rushed to the hospital in Dallas.

We were supposed to start our game, and no one was there to tell us differently. So we played the game. We won, using a trick play I still like to remember. But the whole game happened under a cloud of uncertainty and gloom.

When the game was over, it was known. President Kennedy was dead. The president had been assassinated.

By then also, all the rest of the Harvard-Yale weekend was cancelled. So we bundled ourselves back into the cars and went back to Cambridge, and a weekend with memorial service in a jam-packed Memorial Church, with singing of hymns and tears streaming down the faces of these stalwart New Englanders and high-powered intellectuals.

For game day, I’d not shaved, continuing a practice I’d started in high school. That way, the sweat on my face wouldn’t sting. And I figured I’d look all the more fierce and formidable for the contest.

As a sign of mourning, I continued not to shave through the weekend. And then through the end of the month. And all the rest of that year, growing a beard I’d keep for two years.

The assassination of Kennedy had a major impact on my life. My sense of what was possible expanded, not in happy ways. It was conflated also with what I’d learned a half year before: that my own father — the same age as Kennedy — had a terminal disease.

Then when I was a senior, someone turned me on to an article in Playboy magazine. Mark Lane had a lengthy essay about the Warren Commission’s alleged “Rush to Judgment.” The article gave me goosebumps. I don’t know how much of what Lane said in that article was true, but at the time, it opened me up to a much darker view of the world. (I still remember the passage — about Earl Warren’s visit to Jack Ruby’s cell– that gave the clear impression that the Chief Justice was somehow party to some conspiracy to keep the truth untold.)

As the decade wore on, there was also the huge question of Vietnam– the disaster, the blunder, the crime, the unending futility, the tragedy of Vietnam. And the unanswerable question: if JFK had lived, would he have continued into that quagmire, or would he have steered us clear of this nightmare?

Fifty years ago today. For me, as for tens of millions of Americans alive then and alive today, its impact opened a crack in the cosmos.