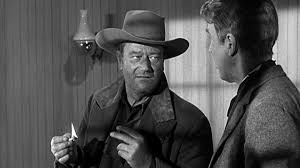 I don’t think so. Not straight-shooting enough for a John Wayne character. Not decent enough for Jimmy Stewart. Not enough integrity for either of the kinds of characters they played.

It is the pervasive dishonesty of the whole thrust of today’s Republican Party that precludes any of them from being cast as a hero.

These are the guys who embezzle the money from their bank, or who are hired to beat up the farmers who get in the way of the cattle baron.