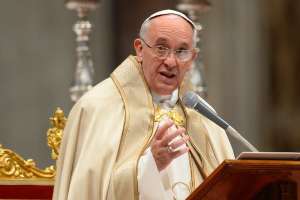 Recently, I was speaking with a Roman Catholic friend who is a great admirer of Pope Francis, and he remarked that the College of Cardinals may have thought they were picking a conservative, but that they were deeply mistaken. Instead, it appears that they picked a true follower of the teachings of (Essene/Jewish Rabbi) Jesus in the Gospels, which of course were highly progressive even by today’s standards, let alone for the times in which Jesus lived. In recent months, we’ve heard Pope Francis criticize a church which had “grown ‘obsessed’ with gay marriage, abortion and contraception.” Pope Francis has also spoken out about what he called the “tyranny” of capitalism, about how “the income of a minority is increasing exponentially, that of the majority is crumbling,”  how “the worship of the golden calf of old has found a new and heartless image in the cult of money and the dictatorship of an economy which is faceless and lacking any truly human goal,” and also how “not to share one’s goods with the poor is to rob them.” For any Republican Roman Catholic out there who thinks that the moderate, pro-capitalist Barack Obama is a “socialist” or whatever, I’d like to introduce you to not one but TWO real “socialists” – Pope Francis and Jesus. 🙂

Now, Pope Francis is out with an “84-page document, known as an apostolic exhortation, [that amounts] to an official platform for his papacy.” Here are a few highlights from this superb document, all of which completely refute – even demolish – conservative (aka, “trickle down”/”supply side”) economics. I’ve added bolding for emphasis.

*”…some people continue to defend trickle-down theories which assume that economic growth, encouraged by a free market, will inevitably succeed in bringing about greater justice and inclusiveness in the world. This opinion, which has never been confirmed by the facts, expresses a crude and naïve trust in the goodness of those wielding economic power and in the sacralized workings of the prevailing economic system. Meanwhile, the excluded are still waiting.”

*”The worldwide crisis affecting finance and the economy lays bare their imbalances and, above all, their lack of real concern for human beings; man is reduced to one of his needs alone: consumption.”

*”While the earnings of a minority are growing exponentially, so too is the gap separating the majority from the prosperity enjoyed by those happy few. This imbalance is the result of ideologies which defend the absolute autonomy of the marketplace and financial speculation. Consequently, they reject the right of states, charged with vigilance for the common good, to exercise any form of control. A new tyranny is thus born, invisible and often virtual, which unilaterally and relentlessly imposes its own laws and rules.”

*”In this system, which tends to devour everything which stands in the way of increased profits, whatever is fragile, like the environment, is defenseless before the interests of a deified market, which become the only rule.”

*”I encourage financial experts and political leaders to ponder the words of one of the sages of antiquity: ‘Not to share one’s wealth with the poor is to steal from them and to take away their livelihood. It is not our own goods which we hold, but theirs’.”

*”Money must serve, not rule! The Pope loves everyone, rich and poor alike, but he is obliged in the name of Christ to remind all that the rich must help, respect and promote the poor. I exhort you to generous solidarity and a return of economics and finance to an ethical approach which favours human beings.”

*”…until exclusion and inequality in society and between peoples is reversed, it will be impossible to eliminate violence. The poor and the poorer peoples are accused of violence, yet without equal opportunities the different forms of aggression and conflict will find a fertile terrain for growth and eventually explode.”

*” Today’s economic mechanisms promote inordinate consumption, yet it is evident that unbridled consumerism combined with inequality proves doubly damaging to the social fabric.”

*”We are not simply talking about ensuring nourishment or a ‘dignified sustenance’ for all people, but also their ‘general temporal welfare and prosperity’. This means education, access to health care, and above all employment, for it is through free, creative, participatory and mutually supportive labour that human beings express and enhance the dignity of their lives. A just wage enables them to have adequate access to all the other goods which are destined for our common use.”