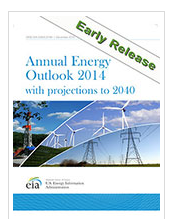 I hate to criticize the federal agency I worked at for 17+ years, especially since the Energy Information Administration (EIA) does great work in many areas (e.g., data collection, energy market and oil supply disruption analysis). But when it comes to long-term energy forecasting (whether we’re talking prices, production, consumption, imports, whatever), I’m sorry to say, EIA has been not just wrong, time and time again, but laughably, outrageously wrong. And, sadly, their latest Annual Energy Outlook (the AEO – with “forecasts,” using the word VERY loosely, out to 2040) continues that abysmal tradition. More on the AEO shortly. But first, let’s review EIA’s track record on long-term forecasting, from a recent article by Old Dominion University Professor Steve Yetiv and me in the Journal of Energy Security.

*Likewise, the 2005 EIA forecast for US natural gas production in 2013 was wildly off — about 20.6 trillion cubic feet (Tcf), compared to actual production of 24.2 Tcf. Not even close.

*EIA’s 2005 long-term forecast also missed the future price of natural gas in the US by a huge margin: a forecast price for 2012 of $3.80/thousand cubic feet (mcf) compared to the actual price of $10.66/mcf. That’s not even close; heck, it’s not even close to being close!

We could go on and on with this, but you get the picture: EIA has basically ZERO ability to forecast long-term energy trends even close to correctly. Let me emphasize: it’s not that EIA is off by a just a bit; they’re off by orders of magnitude. In that context, let’s look at their latest long-term “forecasts” for renewable energy.

*According to Table A16 (“Renewable energy generating capacity and generation”) in EIA’s latest long-term forecast, the agency expects wind power generation capacity to increase from 59 GW in 2012 to 76 GW in 2020 and 85 GW in 2040. That may seem like a lot, but it’s only an increase of 26 GW over the next 27 years or so. To put it another way, that’s about 1 GW of additional wind power per year through 2040, or total growth of just 44% during those 27 years.

If Greentech Media’s forecast through 2016 is correct, and if U.S. solar PV growth were to level off at 9 GW per year after then (an extremely conservative/pessimistic forecast), we’re still talking about growth in U.S. solar PV generating capacity of 9 GW per year from 2017 through 2040, a 200+ GW increase (compared to EIA’s incredibly, wildly pessimistic forecast increase of just 56 GW in total solar power generating capacity (solar PV and solar thermal). But, of course, there’s no reason to think that the acceleration in solar PV growth will stop in 2016. More realistically, it will continue at the rate it’s been increasing. If that happens, we’re talking about mind-boggling growth of 675 GW in U.S. solar PV capacity by 2040 — 12 times greater than the growth EIA projects. (note: to put this in context, current total U.S. power generating capacity is just over 1,000 GW, which EIA expects to grow to over 1,200 GW by 2040)

The bottom line is that EIA’s renewable energy forecast doesn’t pass the laugh test, the smell test, or any other test of even minimal credibility. Given EIA’s horrendous track record in long-term energy forecasting in general, and renewable energy in particular, we shouldn’t be surprised at that. But still, you’d think the media and others wouldn’t just parrot this nonsense, but would take a few minutes to actually examine it. Nah, what am I thinking; they’re way too busy with important stuff like “Duck Dynasty” or whatever.