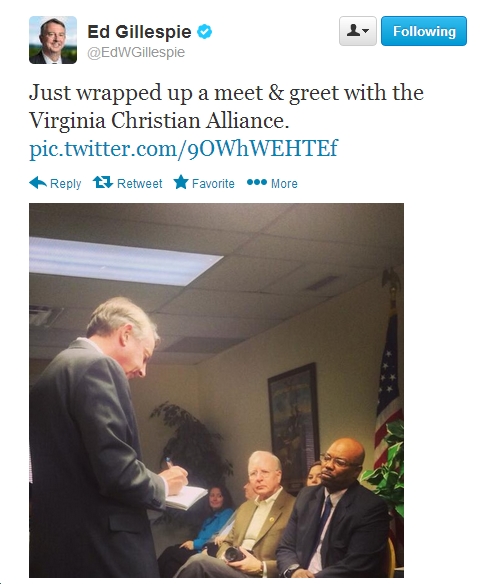 Ed Gillespie, a former George W. Bush operative and lobbyist for such things as Big Tobacco, and now a candidate for the Republican nomination for U.S. Senate from Virginia, had a busy day today. In addition to meeting with anti-abortion marchers, he also held a “meet & greet” with the “Virginia Christian Alliance” (see a screen shot of Gillespie’s tweet at the far right — appropriately enough – of this post). So what is the Virginia Christian Alliance and what do they believe?  Here are a few highlights (lowlights, actually).

*They believe in “Refuting foreign cultures, legal precedents, languages and religions in opposition to Christianity.” In this category, you’ll find articles like “The Islamic Threat to America: Sharia Law Part 1.” Charming.

*These folks also deny the science of evolution and promote “creationism.” According to their website, they’re dedicated to “[r]efuting Darwinian Evolution, Theistic Evolution, Gap and Age-Day Theories, and Progressive Creationism.” Personally, I can’t wait to see their scientific evidence they’ve collected and the papers they’ve published in prestigious, scientific journals on these topics. 😉

*There’s much, much more, but for now, let’s just conclude with this one: they believe in “promoting sexual purity,” including “[r]efuting sexual promiscuity: adultery, fornication, heterosexual oral sex, pornography, incest and bestiality, pedophilia, and homosexuality.” OK, I think we can all agree that incest, bestiality and pedophilia are unacceptable. The rest of them, though? I have a feeling that many Virginians would not agree with waging war on heterosexual oral sex, “fornication,” and homosexuality. Unless, for some reason, Ed Gillespie has reason to believe that he can do better running on such a platform than E.W. Jackson, Ken Cuccinelli and Mark Obenshain did last year.

Anyway, since Ed Gillespie is proud to meet with these people, should we presume that he agrees with them on the aforementioned? If not, we’d love to hear specifically where he disagrees. We’re all ears, Ed! 🙂