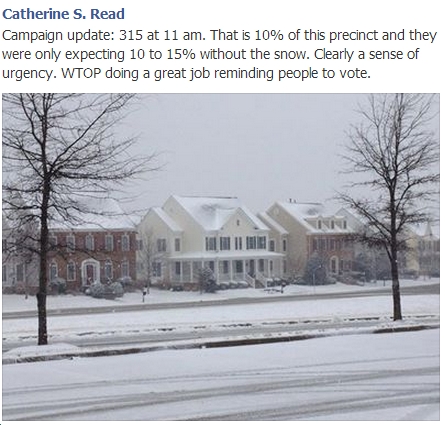 The screenshot of a Facebook post by Catherine S. Read seems encouraging. What are you seeing/hearing about the 33rd State Senate district special election today? Please let us know. Thanks.

UPDATE 5:46 pm: @notlarrysabato tweets, “The % of the electorate coming from Dem leaning precincts looks good for Wexton, BUT…The overall turnout in Loudoun is under the 2011 general election- where low turnout led to a GOP 9-0 sweep of county board…So nothing to report- we just need to wait until 7 pm to see who wins.”

UPDATE 1:08 pm: ‏@BrianSchoeneman tweets, “Getting reports from the precincts that roads are starting to freeze and some voters are reporting a large number of accidents on the roads.” Not good.

UPDATE 12:31 pm @JulieCareyNBC reports, “Despite the snow, polling place in Belmont Ridge area of #Loudoun had an hour long wait to vote this am.” Belmont Ridge went 57%-40% for McAuliffe over Cuccinelli in November.

*”I understood all of those results to be 10am, but am hearing some may have been 11am results. I apologize if I am in error.”