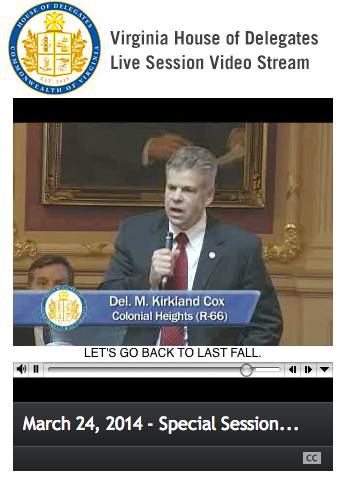 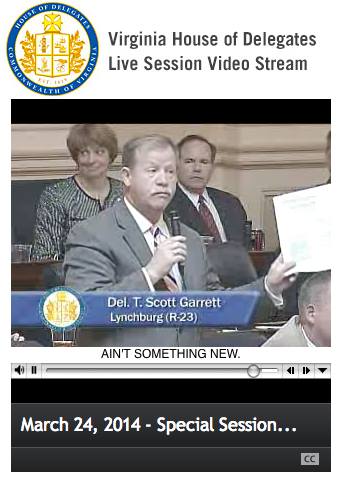 Why not? Very simple. As Del. Bob Brink and others explained yesterday at a Medicaid forum in Arlington, Virginia Republican General Assembly members keep voting against their own constituents’ self interest because:

1) Gerrymandering has resulted in “red”-district delegates only having to worry about ONE thing politically – “a primary challenge from a Tea Party candidate.” And, as Brink added, “the Tea Party is virulently, virulently opposed to the Affordable Care Act and to the president who enacted it.”

2) Just to hammer that previous point home, Brink noted that Virginia Republicans in 2013 saw two Republican delegates (in Loudoun County and Winchester) defeated by Tea Party challengers. In Brink’s view, “every Republican member down there has a picture of those two defeated delegates on their wall, and that guides a large part of why we are where we are on this.”

Just a few minutes ago in the Virginia House of Delegates, we saw the results of that calculus. On the one hand, we had Democrats presenting a logical, rational case why expanding Medicaid makes an enormous amount of sense. Democrats systematically demolished every one of the Republicans’ supposed “arguments” against Medicaid expansion, not that Republicans were listening or cared. Because, sad to say, this is all about the most narrow of political calculations for House Republicans: vote FOR anything that can possibly be labeled “Obamacare” expansion and face a likely Tea Party challenge; or vote AGAINST anything of the sort, thus selling out their constituents, but  at least not facing a dreaded Tea Party challenge. And no, appeals to the better angels of their nature (if they have them), to emotion, to morality, to logic, to reason, to economics, whatever won’t work, because Republican delegates’ narrow, political self interest trumps ALL of that by far.

So what do we do about this situation? There’s only one thing, frankly: we are extremely unlikely to win the battle on Medicaid expansion this year, or next year, so it’s going to come down to the 2015 General Assembly elections. We either take back the House of Delegates – or come close and put the fear of electoral defeat into they hearts of the remaining Republicans in Obama/Kaine districts – and maintain control of the State Senate, or we can forget about it. Other than that, we should of course continue to make it clear that Democrats have responded to all legitimate, semi-legitimate, or even in some cases illegitimate “concerns” by Virginia Republicans about Medicaid expansion. The goal of this should be to make crystal clear to Virginia voters – and to the media, although they are apparently set on their “both sides” false equivalence idiocy, so good luck! – that Democrats are the reasonable ones in this, while Republicans are being completely unreasonable, irrational, victims of Obama Derangement Syndrome, etc. Then, it’s a matter of Democrats recruiting great candidates for 2015, funding them to the hilt (which is where T-Mac’s PAC comes in), and winning back as many of the 18 Obama/Kaine House of Delegates districts currently held by Republicans as possible.

Meanwhile, as was made crystal clear on the floor of the House of Delegates this morning, Virginia Republicans are completely beyond reason on this issue. That point was driven home to me as I listened to House Majority Leader Kirkland Cox repeat his distortions and lies, followed by the even nuttier (if that’s possible) and more extreme Del. Scott “Jerry Falwell Lite” Garrett talk actually quote Sarah Freakin’ Palin (“how’s that hopey changey working out for ya?”). Yes, on one level these people are a complete joke. But on another level, they are deadly serious – emphasis on the word “deadly,” as Republicans’ refusal to extend healthcare coverage to hundreds of thousands of Virginians will undoubtedly lead to (actually, has already led to) a great deal of sickness and even death. The question is, how do they look themselves in the mirror while doing this to the people they’re supposed to be representing? It’s amazing.