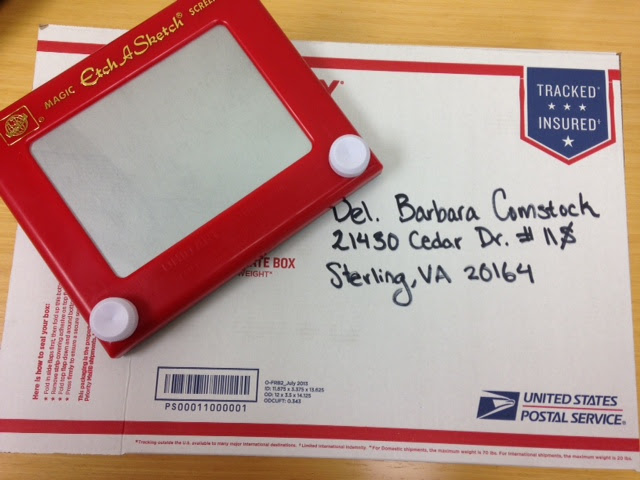 Loudoun, Va. – The “Etch A Sketch,” a mechanical drawing toy made by the Ohio Art Company, has become a fixture of modern Republican campaigns. Following a wild race to the rabid right during the primary, GOP candidates simply turn their messaging upside down and shake it, erasing their existing political picture.

The 10th District Democratic Committee is giving an “Etch A Sketch” to Barbara Comstock.

“We thought it would be a nice gesture,” Communications Director Alex Parker said from his office in Loudoun. “Since we know she’s going to need an ‘Etch A Sketch,’ we thought we’d give her one. We also bought a little key-chain one in case Comstock needs to shake off her record on the fly.”

The two “Etch A Sketch” toys were mailed to Comstock’s campaign headquarters on Monday.

The use of “Etch A Sketch” toys in GOP politics became famous during the 2012 Mitt Romney presidential campaign. Romney top aide Eric Fehrnstrom was asked how the campaign would change after winning the Republican nomination. Fehrnstrom responded: “Everything changes. It’s almost like an ‘Etch A Sketch.’ You can kind of shake it up and we start all over again.”

The 10th District Democratic Committee anticipates Comstock will use her new “Etch A Sketch” on the following issues:

• Comstock’s career as a political partisan; working to demonize President Clinton and then-First Lady Hillary Rodham Clinton; described in the Washington Post as a “one woman wrecking crew” in her work as a GOP operative; worked as “chief investigator” for Rep. Dan Burton, the Indiana congressman who once shot a watermelon to publicize his conspiracy theory concerning the death of Vince Foster, White House counsel.

• Comstock’s record opposing equality in Virginia; opposes the right to marry; voted to allow employers to fire or harass individuals for their sexual orientation.

• Comstock supports government-shutdown politics; endorsed by House Majority Leader Eric Cantor and the shut-down caucus in Washington; endorsed by GOP party bosses in Richmond, who collect government healthcare and want to shut down Virginia’s government to deny healthcare to others.

• Comstock’s supporters and endorsers; Radio entertainer Sean Hannity, most recently under fire for advocating for an armed insurrection against the Federal government, while defending a avowed racist and tax-delinquent rancher in Nevada; Radio entertainer Mark Levin, who called on Republicans to “screw the stock market and shut down the government.”

The 10th District Democratic Committee recommends Comstock contact her political donor, endorser, and role model, two-time failed Presidential candidate Mitt Romney if she has any questions about her new “Etch A Sketch.”