For two main reasons, I have decided I will definitely NOT be supporting Bill Euille in the 8th CD Democratic primary. First, there’s the fact that his campaign hasn’t lifted a finger to help Democrat Alan Howze in today’s Arlington County Board election campaign against Republican John Vihstadt. No explanation, either, just no help (calls? emails? door knocks? fundraisers? poll greeters? anything?). #FAIL

Second, see the flier below (click to “embiggen”), in which Bill Euille proudly announces that his “friend” Sheila Johnson will be holding a fundraiser for him. So what’s wrong with Sheila Johnson, you ask? Other than her $50,000 contribution to Bob McDonnell on September 30, 2009, during the McDonnell-Deeds gubernatorial contest. That’s bad enough, but then Johnson – supposedly a Democrat – proceeded to mock Creigh Deeds for having a speech impediment (see video above). As I wrote at the time:

This is disgusting, Sheila Johnson – a “Democrat” who has nonetheless endorsed “Barefoot and Pregnant Bob” McDonnell for governor – mocking Creigh Deeds for having a (slight) speech impediment. Sheila Johnson should be ashamed of her behavior, and Bob McDonnell should condemn her for it. 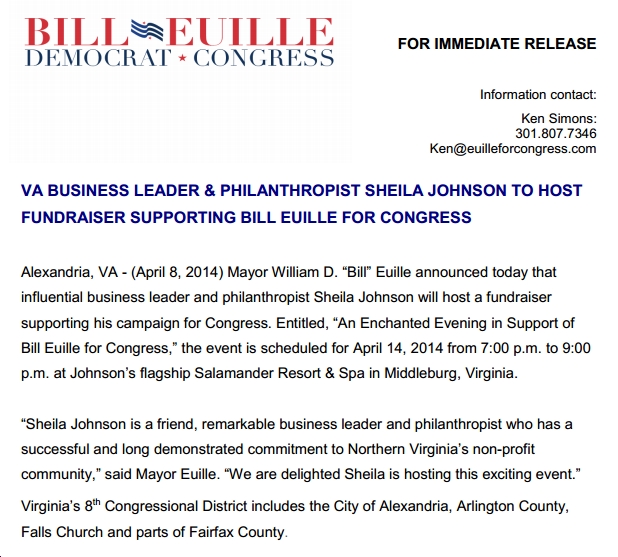 What Johnson did to Creigh Deeds was, and remains, unacceptable.

Oh, and it’s not as if Johnson just gave money to McDonnell, she also made an ad for the guy, in which she claimed McDonnell is “a bipartisan leader who gets results.”

Yeah, “results” – like claiming that Verbena Askew being a lesbian “certainly raises some questions about the qualifications to serve as a judge.” Or maybe it was McDonnell’s infamous thesis that he wrote for theocrat Pat Robertson’s loony-tunes law school, in which he wrote, “when the exercise of liberty takes the shape of pornography, drug abuse, or homosexuality, the government must restrain, punish, and deter?” Anyway, whatever the reason, there was no excuse for Sheila Johnson to have contributed to and cut an ad for McDonnell over Deeds in 2009, and there was certainly no excuse for Johnson to mock Deeds’ speech impediment. For Bill Euille to proudly accept her support reflects back on him, and not in a good way.